Pay & Benefits
In Focus: How Many Employees Face Furloughs?

The number of workers on unpaid leave during a government shutdown varies widely by agency.

By Kellie Lunney and Kelly Martin

Federal agencies decide which employees to furlough and which to keep on the job during a government shutdown. Excepted employees include workers “who are performing emergency work involving the safety of human life or the protection of property or performing certain other types of excepted work,” according to furlough guidance from the Office of Personnel Management. In other words, they aren’t furloughed. Employees who are not funded through annual appropriations are “exempt” from unpaid leave if the government shuts down.

How many employees an agency furloughs during a government shutdown varies, and tends to depend on mission. In some departments, like Veterans Affairs, most of the workforce stays on the job. At the Housing and Urban Development Department, however, the opposite is true: most employees are furloughed.

If the government closes on Tuesday because of a lapse in appropriations, roughly 800,000 civilian employees will go on unpaid leave. Here’s a snapshot of a few agencies and their workforce data from 2011, the last time agencies had to prepare contingency plans for a possible shutdown. The list of agencies and corresponding data are not comprehensive. 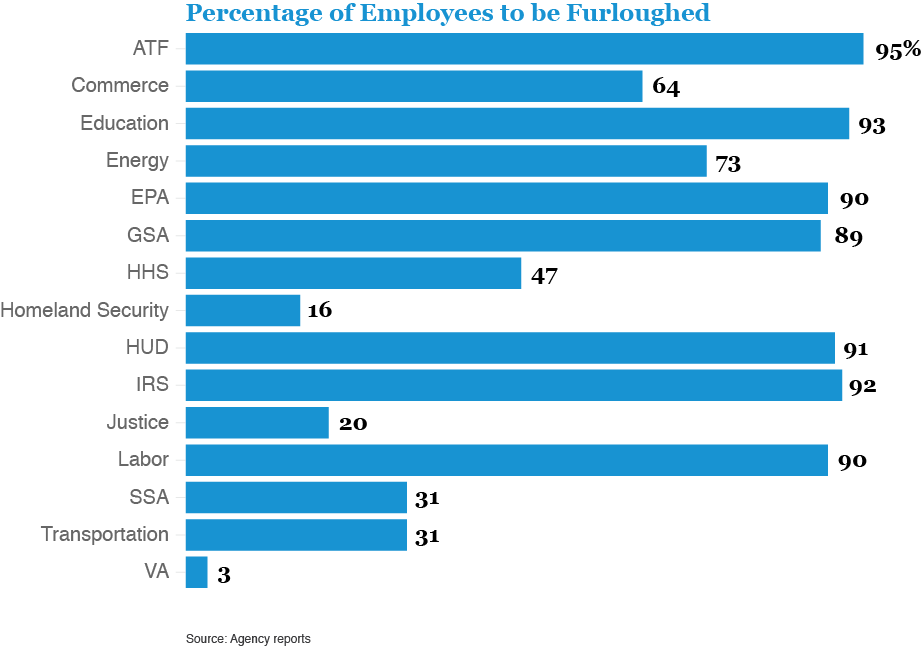