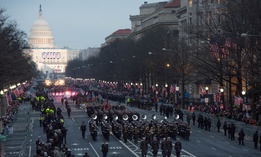 White House will propose a switch to the chained CPI and a hike in pension contributions.

President Obama’s 2014 budget proposal will include a less generous formula for calculating federal retirees’ cost of living adjustments, and ask federal employees to make higher contributions to their retirement pensions, a senior Obama administration official has informed members of Congress.

The official said Obama would agree to a chained Consumer Price Index -- which changes the inflation formula to account for modifications in purchasing habits as prices change -- only if congressional Republicans are “willing to do more on revenues.”  The chained CPI is viewed as a more accurate measure of how people substitute one item for another in the face of a price increase, but the result would be lower COLAs over time for federal retirees and Social Security beneficiaries.

“This isn’t about political horsetrading,” the official said. “It’s about reducing the deficit in a balanced way that economists say is best for the economy and job creation.”

Advocates for federal retirees warned against accepting arguments in favor of the chained CPI.

“Don’t be fooled by economists and politicians who claim that switching to the chained CPI formula for Social Security benefits, retirement annuities and disability insurance is ‘painless,’ ” National Active and Retired Federal Employees Association President Joseph A. Beaudoin said in a statement. “While the short-term reduction in benefits may be modest, the long-term reduction will be substantial.”

White House officials told members of the media the president’s budget will also target $35 billion in savings by increasing the amount federal employees must pay toward their retirement benefits, The Washington Post reported. The savings were also previously included in negotiations with House Republicans.

New federal employees already are seeing a hike in their pension contributions: In 2012 lawmakers raised the contribution rate from 0.8 percent to 3.1 percent for new hires.

The American Federation of Government Employees urged lawmakers to oppose the 2014 budget provisions, saying Obama has been acting more and more like an enemy.

“The administration signed the Budget Control Act that brought us the sequester,” AFGE President J. David Cox said in a statement. “It pushes a cruel cut to Social Security, veterans, and federal employee retirement benefits through the chained CPI. And now, a final act of betrayal. The White House proposes a fiscal 2014 budget with $35 billion MORE in retirement system cuts, accelerating the race to the bottom for federal workers and their families.”

“If the president believes these modest entitlement savings are needed to help shore up these programs, there's no reason they should be held hostage for more tax hikes,” Boehner said in a statement. “That’s no way to lead and move the country forward."

Kellie Lunney contributed to this report.

CLARIFICATION: This story has been updated to clarify a quote from AFGE.

NEXT STORY: Understanding Your TSP Options