The Office of Personnel Management is not properly tracking the amount of time federal employees spend conducting union work on the taxpayers’ dime, which could mean the agency is significantly underreporting its use across government.

OPM estimates the cost of “official time” -- hours spent performing union business -- by multiplying the average salary at a given agency by the number of official time hours reported. But that methodology does not provide the most accurate estimates, according to a new Government Accountability Office report initially made public Tuesday by congressional Republicans. When GAO compared OPM’s statistics against actual official time hours worked at six agencies, it found OPM underestimated the cost of employees conducting union work by 9 percent.

The human resources agency said it does not prioritize collecting accurate official time data, as it is not statutorily required to collect it at all. It has released governmentwide figure since 2002, however. OPM asks agencies to fact check its information, GAO said, but does not account for any discrepancies that arise.

Federal labor unions are entitled to official time under federal law, as a 1978 statute found it to be “in the public interest and contributes to effectively conducting public business.” Official time occurs when federal employees report to their normal offices and are paid their normal salaries, but perform union work “in lieu of their regularly assigned work.”

In a 10 agency sample that covers nearly half of federal bargaining unit employees, GAO found a 25 percent increase in the use of official time since 2006, when the auditors last studied the trend. At seven of the 10 agencies, however, the average number of official time hours taken per employee deceased over the eight-year period. The increases at the departments of Veterans Affairs, Transportation and Homeland Security were so significant that the trend still jumped. 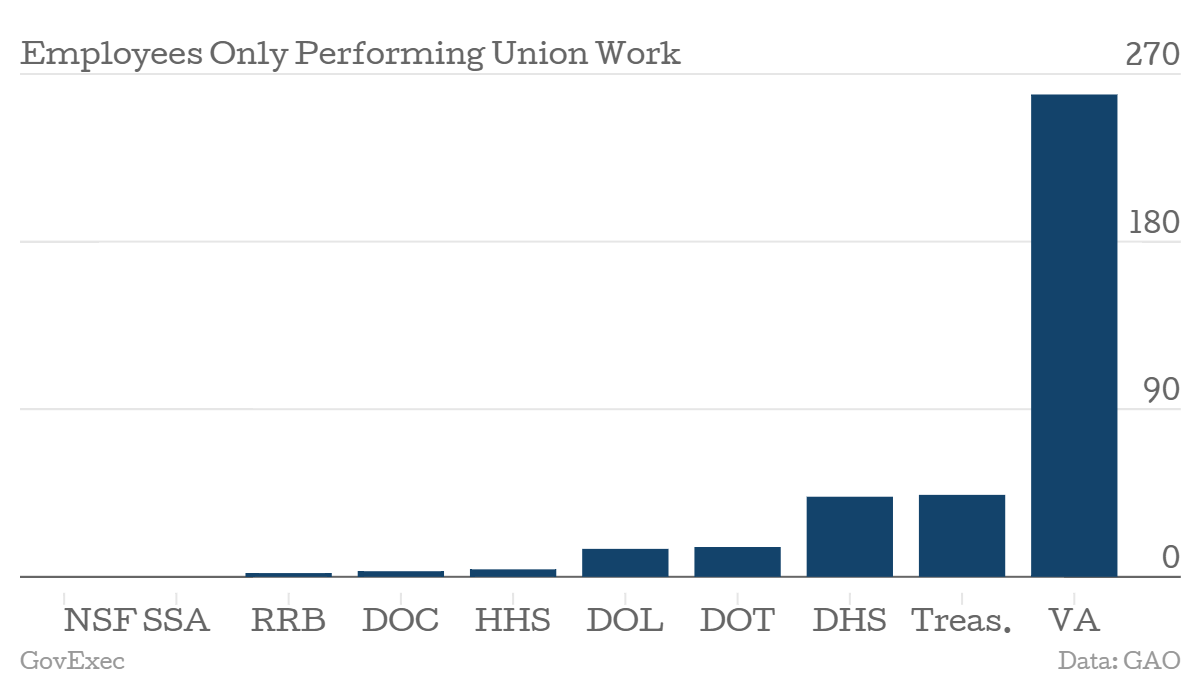 At VA, less than 0.1 percent of employees took official time. However, GAO found VA may not be accurately capturing its usage. Additionally, 259 VA employees worked full time on union activities, despite receiving federal salaries and working in a federal office. 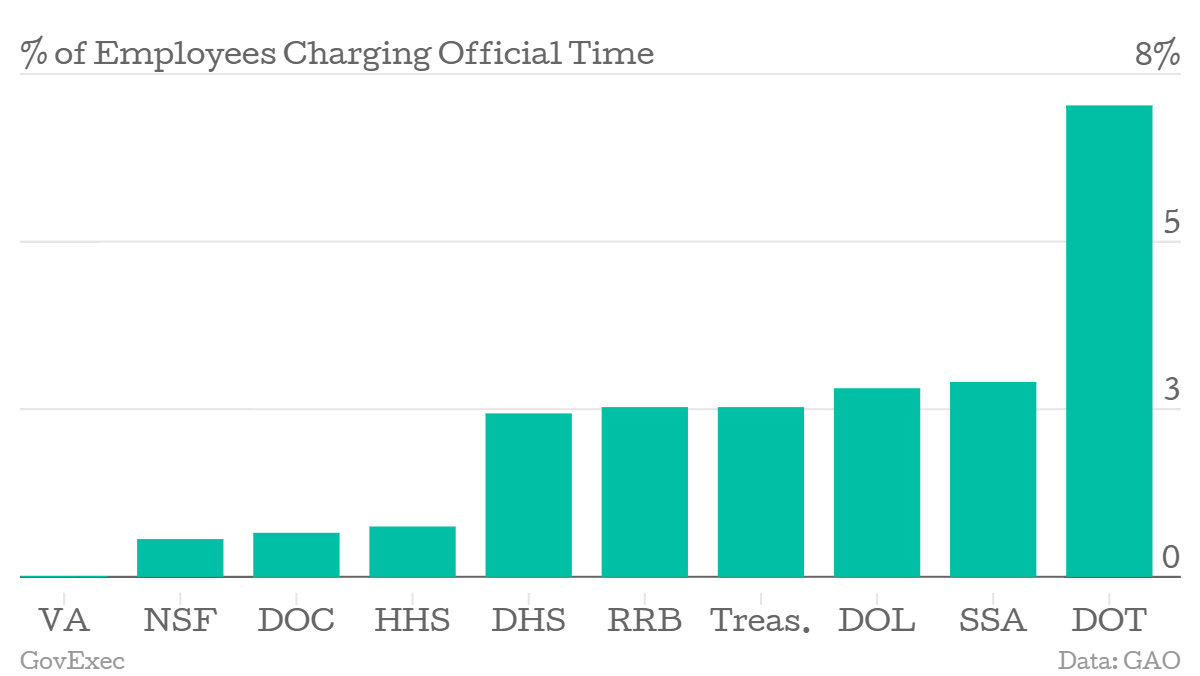 “With veterans literally dying waiting to see a doctor,” Coburn said, “VA staff should be focused on fulfilling the promises made to America’s heroes rather than on performing union duties to secure greater benefits for themselves.”

VA defended its use of official time, saying it helped improve labor-management relations and led to more quickly resolved disputes. The agency has a complicated relationship with its labor groups, as employees are represented by 18 different unions at 200 offices.

All 10 agencies GAO examined laid out official time rules in their various collective bargaining agreements. Eight of them employed a total of 386 people who performed union work full time.

The collective bargaining agreements used three mechanisms to oversee the use of official time: a specified cap on the total number of official time hours employees could charge; designated positions that could charge official time; or an unspecified, “reasonable” amount of time. Most agencies used the reasonable time approach.

GAO also found that most agencies do not calculate non-payroll costs of official time, such as travel, office space and phone services. The Social Security Administration does track those costs, and found in fiscal 2013 they accounted for 14 percent of the total official time bill.

Rep. Darrell Issa, R-Calif., the outgoing chairman of the House Oversight and Government Reform Committee, said agencies and OPM should ensure the authenticity of their data.

“This study shows that the federal government is falling short in keeping track of so-called ‘official time’ and must make changes to prevent underreporting,” Issa said. “Taxpayers have the right to know the true cost of the union activity they are funding.”

J. David Cox, national president of the American Federation of Government Employees, defended OPM’s statistics, saying “any reasonable person” could rely on it.

“The GAO report shows that even accountants don’t always agree on the best way to keep track of data,” Cox said. “GAO criticizes OPM’s accounting procedures, but never suggests that OPM ‘misstates’ or ‘misrepresents’ official time data. Since both GAO and OPM are producing only estimates, neither can be described as wrong or misleading.”

NEXT STORY: Is a Third Lawyer the Charm for House Republicans?