Pioneer of new agency places premium on having the right people and the right culture. 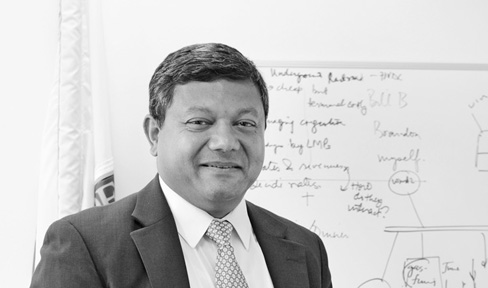 This is the second in a series of profiles based on interviews for the book Paths to Making a Difference: Leading in Government (Rowman & Littlefield, 2011) by Paul R. Lawrence and Mark A. Abramson, which highlights the management lessons of 24 political executives during their first 18 months in the Obama administration.

Arun Majumdar, who became the first director of the Advanced Research Projects Agency-Energy in October 2009, knows what it's like to build a new federal organization from the ground up. Formerly a member of the Lawrence Berkeley National Laboratory's executive team, Majumdar was tapped to lead the new agency on a mission to revolutionize the nation's energy efficiency and economy.

Created by the 2007 America COMPETES Act, ARPA-E invests in projects aimed at developing new energy technologies and reducing the nation's dependence on foreign oil. The agency awarded its first contract in 2009 after receiving $400 million in funding through the American Recovery and Reinvestment Act. As of summer 2011, the agency had invested in 121 projects ranging in size from $400,000 to $9 million.

Majumdar has since been nominated to serve as undersecretary at the Energy Department. His experience at ARPA-E provides three leadership lessons on launching new organizations.

Majumdar's first order of business was to form relationships that would be central to the agency's success. "During my first days, I reached out to key people in the Department of Energy. It was a new agency and I needed to reach out," he recalls. "I put together an advisory committee of notable individuals in the field to get their feedback. I wanted to know if we were doing the right things. I also spent time reaching out to the Office of Management and Budget during my first months on the job. I found that understanding Congress was really crucial. I was learning on the job."

The outreach activities proved crucial. "I reached out to other relevant government agencies to see if there is synergy with what we do. I reached out to universities. I set up informal meetings to just chat with experts to find out their issues and thoughts. I wanted to know what people were already doing," he says. "We decided to have a big meeting in Washington, D.C., in which we would bring together all of our stakeholders . . . It was quite an impressive event. People were engaged. We want to be a catalyst for change."

Based on his outreach activities, Majumdar concludes, "There is no substitute for retailing. You have to go see people one-on-one and get to meet them. You also have to meet the right people."

During his confirmation hearings to become undersecretary for Energy, Majumdar told Senate committee members that people were one of the five core values instrumental to ARPA-E. In describing his early days at ARPA-E, Majumdar told us, "I started recruiting people. I wanted to get the right people. Putting together your team is critical. As a new agency with special hiring authorities, we had the flexibility to recruit outside of the civil service system. People didn't have to wait for six months. We have proved that good people will come here. We were able to get nearly all the people we wanted."

Majumdar placed an emphasis on creating and reinforcing a culture of flexibility. He was very aware of the opportunities inherent in standing up a new organization. "We came in with a clean slate," he says. "There was no 30-year history to overcome. I think it is difficult to change existing organizations. The pace of change in older organizations is much slower. The pace here is really fast. We have a 'let's get it done' attitude. We have a sense of urgency. We are, in fact, building the plane while we are flying it."

According to Majumdar, the next step after hiring the right people is to create the right culture in which they can flourish. "I want innovation to be the DNA of ARPA-E. It is part of our core strategy. Once you get people here, you have to give them the freedom to solve problems. We want people who like being challenged," he says. "You have to create an atmosphere to allow them to have a real impact. You need to create a culture of openness and discussion. You don't want a top-down environment. What I have done is to create a culture that empowers people at ARPA-E, while also holding them accountable. I want people to succeed and want to create an environment for success. So the key elements to creating a culture are getting talent, creating an open dialogue and allowing people to realize their potential."

NEXT STORY: SBA’s elevation to Cabinet-level is a symbolic move, experts say