Former House speaker positions himself as an outsider candidate, willing to cut spending and take on the establishment. 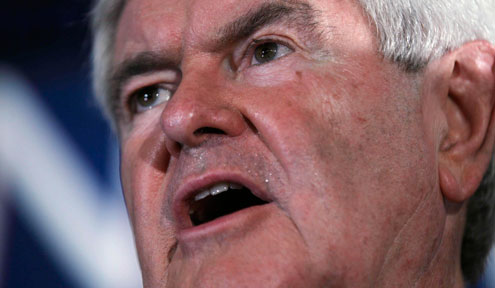 Newt Gingrich tried to cast himself as the toughest threat to President Obama on Sunday morning, fresh off his blow-out victory in the South Carolina Republican primary and ahead of the next nominating contest.

"My job in Florida is to convince people that I am the one candidate who can beat President Obama in the debates," Gingrich said on CNN's State of the Union .

He also highlighted what he saw as the stark contrasts between his candidacy and Obama's by saying the two differed greatly on major issues such as domestic spending, financial regulation and foreign affairs. "The dynamics of the Gingrich-Obama fight are much better for Republicans than a Romney-Obama fight," he said.

Host Candy Crowley pressed Gingrich a handful of times about past controversies in his political life, including his work as a consultant with Freddie Mac and the ethics investigation conducted during his time as speaker of the House. Gingrich calmly responded, urging voters to read the 1,300-page ethics investigation for themselves and reminded Crowley that he was cleared of 83 out of 84 ethics charges.

Then, he turned the question of transparency back on his main rival, alleging that Mitt Romney, as governor of Massachusetts, was not transparent about the development of the healthcare legislation, nor has he been open about his income given his reluctance to immediately release his tax returns. (Romney said on another show Sunday that he would release his returns on Tuesday, to which Gingrich said on NBC that the issue was now "set to side.")

Toward the end of his appearance, Gingrich positioned himself as an outsider candidate, willing to cut spending and take on the establishment, much like, he said, former President Ronald Reagan. It was a tricky move, considering Gingrich's long-time residency in Washington and his former leadership role in Congress.

"I represent the largest amount of change of any candidate," he said. "I'm not representing Wall Street or the politicians in Washington."

"Governor Romney's core problem was that he governed as a Massachusetts moderate, which, by the standards of Republican primary voters, is a liberal," he said.

Gingrich also said Romney's lack of authenticity was one of his greatest flaws. "The number one thing people look for in difficult times is authenticity," he said. "They want somebody who is what he seems to be, somebody who is comfortable with himself."

Gingrich went on to say that he was the most straightforward candidate. "I have flaws, I have weaknesses, I've had a long career," he said. "But the fact is, what you see really is what you get."

He added that the general election will be won in the debates, and that he's the only candidate capable of taking on Obama.

When asked whether he'd be willing to spend a full hour debating Romney on Face The Nation 's long episode next weekend, Gingrich said that he had to check with his campaign that that he would be willing to debate. "I suspect we'd be happy to come do it," he said.

NEXT STORY: Federal agencies in Washington will open late because of wintry weather