Most external applicants don’t understand how to navigate the government’s complicated hiring process. 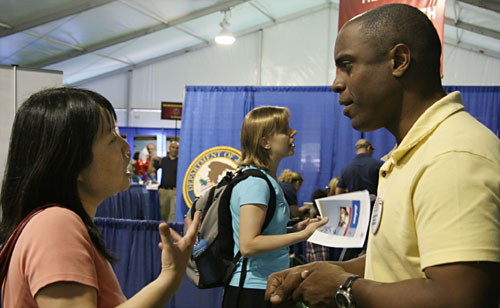 NIH recruiter Chris Pugh (right) fields questions at a May 8 job fair on the National Mall.

Although the federal market has outpaced industry in job creation, according to Gallup's Job Creation Index for April, not enough private employees are willing to make the leap to the government sector, observers say.

"[First,] they don't understand where they fit into the government; second, job postings aren't written in plain language, [and] finally, coming into the system requires extra work," said Tim McManus, vice president of education and outreach at the nonprofit Partnership for Public Service. The Partnership focuses on improving government recruitment and administers a pilot program that helps experienced private sector employees approaching retirement transition into the federal government.

Although federal agencies will need to fill 600,000 positions during the next three years, McManus noted, they are not being filled quickly enough. On average, it takes five months to fill positions in the government, compared to 80 days in the private sector, he said.

He supported the Obama administration's hiring reform effort , announced on Tuesday, that among other things, eliminates the government's traditional essay-based applications, which McManus said have been an obstacle for candidates from the private sector.

"People always say that job seekers aren't interested in government. That's baloney," said McManus. "People just don't understand how to apply for [government jobs]." In addition, he said salaries and positions don't translate easily between the private and public sectors. He urged federal recruiters to advertise jobs in ways those outside the bureaucracy can understand.

The government was in recruitment mode this past week. Job hopefuls, many of them former private employees, flocked to recruiting tables set up on the National Mall in Washington on May 8 as part of Public Service Recognition Week.

Among them was Sagar Pokhahel, dressed in a suit and clutching a résumé portfolio, who said he had been searching for a job for the past seven months and applied for two federal positions in the past month. He complained the online application was cumbersome: "It asked a lot of questions and kept repeating the same thing two or three times."

Chris Pugh, a recruiter at the National Institutes of Health, is sensing "more desperation" among applicants in the current economic climate, but noted many private sector employees don't know how to build a federal résumé or understand government's language.

Those from the private sector "often express surprise and bewilderment when I walk them through the hiring process," said Richard Gudnitz, recruitment program manager at NASA's Goddard Space Flight Center. The fact that agencies hire differently makes the hiring process even more convoluted, he said.