Management
The Federal Agencies With the Most (and Least) Sexual Harassment

At every agency, more women than men report harassment.

More than one in five female federal employees said they experienced some form of sexual harassment in the workplace between 2014 and 2016, according to a recent survey, and 14 percent of all federal workers reported the same.

At every major agency in government, more women than men said they had felt sexually harassed at some point in the previous two years, the Merit Systems Protection Board found in the survey. Across government, the gap was 12 percent. MSPB collected the data in 2016 and released the survey earlier this year.

Overall, the Veterans Affairs Department had the highest rate of employees who reported experiencing sexual harassment, at 22 percent. VA was followed by the Homeland Security Department (18 percent), Environmental Protection Agency (15.9 percent), Office of Personnel Management (15.7 percent) and State Department (15.3 percent). The lowest rate was at the Securities and Exchange Commission (8.2 percent), followed by the General Services Administration (8.5 percent), the Army (9.3 percent), the Federal Deposit Insurance Corporation (9.3 percent) and NASA (9.5 percent).

Employees were considered to have experienced sexual harassment if they checked one of 12 boxes on MSPB’s survey, with the boxes divided in three categories: unwelcome behaviors that disparage or objectify others based on their sex or gender, unwelcome behaviors of a sexual nature that are directed toward a person, and pressure or force to engage in sexual behavior.

Here is a chart showing sexual harassment employees reported experiencing at each agency, broken down by gender: 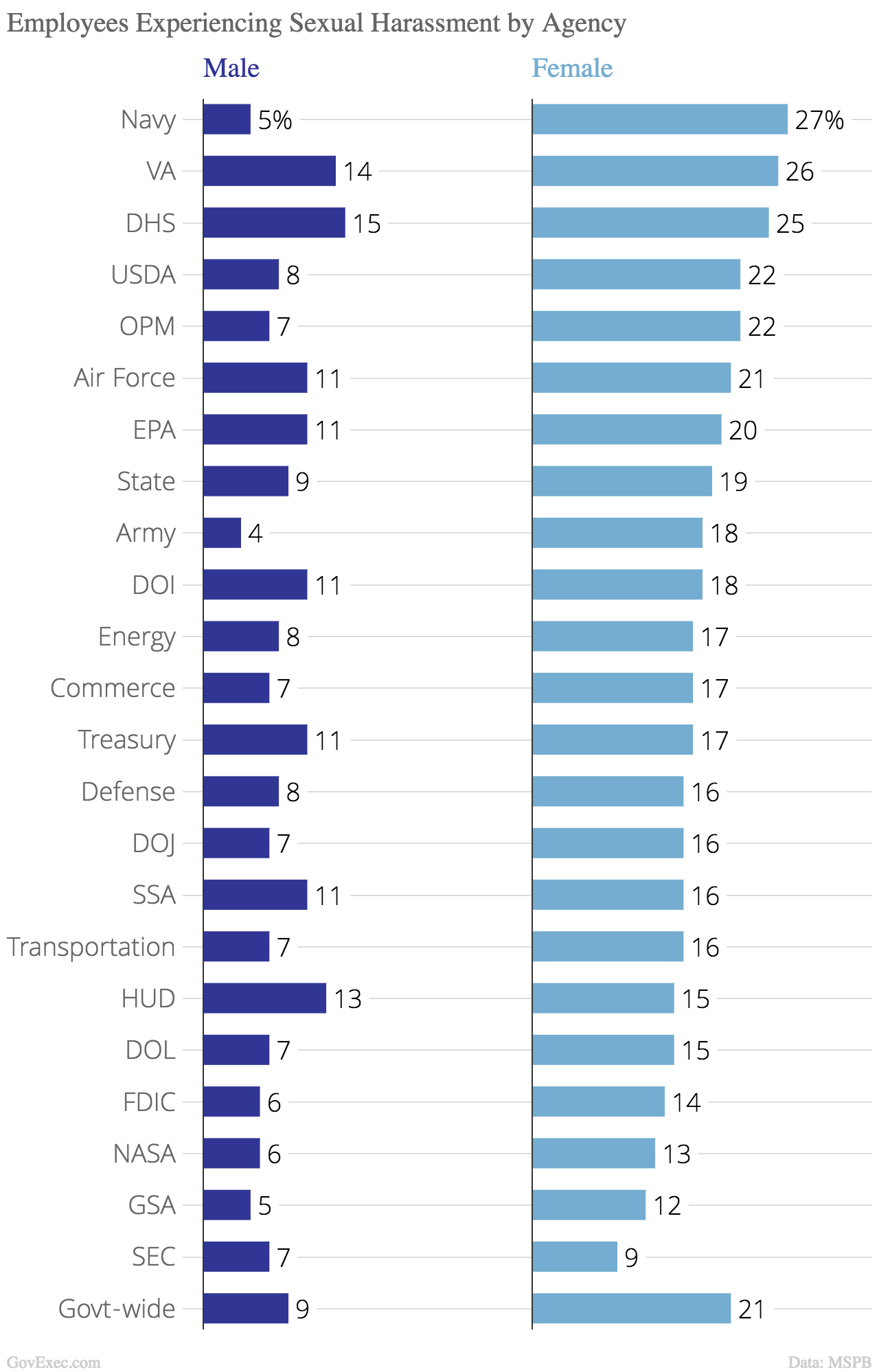 In a summary of its findings issued in May, MSPB found cause for optimism in the absence of a gap between men and women with regard to whether certain behaviors are viewed as sexual harassment. About 95 percent of federal workers said sexual coercion clearly indicated sexual harassment, while at least 90 percent said the same for behaviors related to unwanted sexual attention and sexual teasing or jokes. Just 82 percent, however, said “exposure to sexually oriented conversations” amounted to sexual harassment.

“As federal employees move toward greater consensus regarding which behaviors should be identified as sexual harassment, these behaviors are more likely to be avoided and therefore eliminated from the workplace,” MSPB said. “Although some organizations will have further to go to implement the changes needed to accomplish this goal, the end result will be to create a more appropriate and productive work environment for all employees.”

While agencies have a long way to go, there has been significant improvement. In 1994, the last time MSPB surveyed the workforce on these issues before the 2016 survey, 44 percent of women said they had experienced sexual harassment in the previous two years (compared to 21 percent in 2016).

NEXT STORY: Blame Weak Management, Not Lack of Authority, for Poor Performers