Feds are opposed to the president-elect's plans to shrink size and scope of government.

Less than two-thirds of the federal workforce is firmly committed to staying on the job following the election of Donald Trump as president, according to a new survey.

More than one in four federal workers, or 28 percent, will definitely or possibly consider leaving their jobs after Jan. 20 when Trump is sworn into office and becomes leader of the executive branch, according to a new Government Business Council/GovExec.com poll. Sixty-five percent of feds say they will not consider ending their federal service.

About half of those who will consider leaving are eligible for retirement and would do so earlier than they originally planned, while another 37 percent said they would seek another job outside of federal government. Just 1 percent said they would quit and figure out their next step at a later time, while an additional 12 percent said they were not sure what they would do. Federal employees considering leaving government have not backed off those threats now that a Trump presidency has moved beyond the theoretical; in October, 27 percent of civil servants were considering retiring or finding a new job. 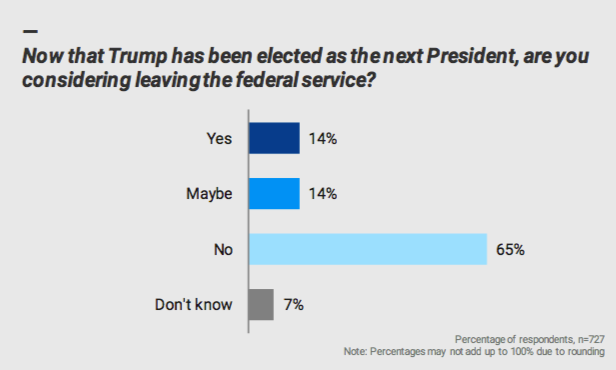 The presidential campaign made very few federal employees feel better about their jobs; just 8 percent of respondents said the election had a positive impact on the perception of federal service, compared to 60 percent who said it had a negative impact.

For those who opt to leave government, their jobs could remain vacant for an extended period of time as Trump has vowed to freeze hiring across agencies immediately upon taking office. Just 15 percent of feds said they hold a positive view of that proposed policy, while 67 percent expressed a negative view. A smaller majority -- 51 percent -- said they oppose Trump's proposed requirement that federal agencies eliminate two existing rules or regulations for every new one they create, while 23 percent said they support it. 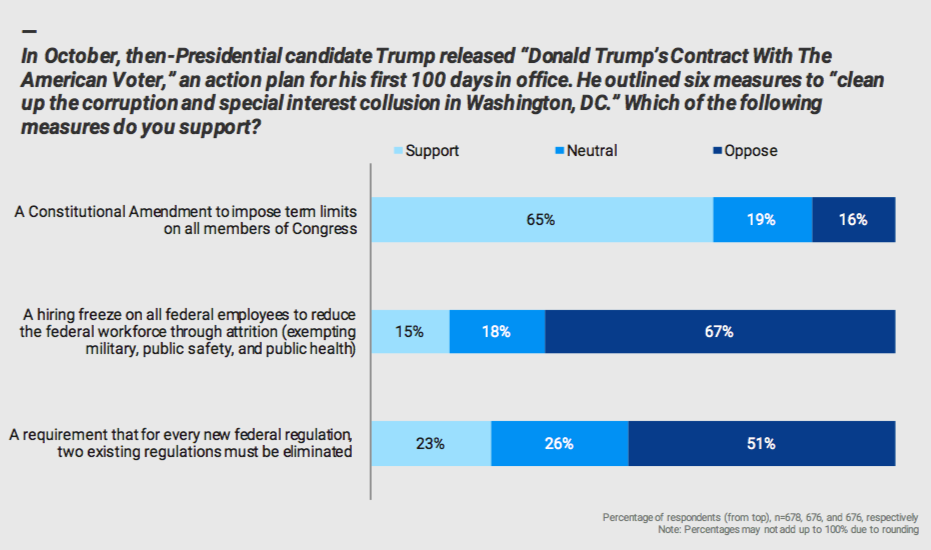 Only 14 percent of federal employees said they believe there is no waste at their agencies to cut. Three-quarters of feds said there is some waste where they work, but they overwhelmingly said it is insignificant. Just one-quarter of feds said there is significant amount of waste at their agency, and only 17 percent said they believe Trump will effectively cut it. Trump throughout the campaign promised to eliminate “waste, fraud and abuse all over the place.”

One way the president-elect has vowed to follow through on that promise is by negotiating better deals on government contracts, and he has taken to Twitter to make his opening bids in that process. Federal employees are split on that tactic, with 38 percent calling it an “irresponsible” move that could negatively impact federal programs and the economy and 37 percent saying it is “refreshing” to see someone take on excessive spending and delays on contracts.

Government Business Council released the survey on Jan. 11, 2017, to a random sample of Government Executive, Nextgov, Defense One, and Route Fifty subscribers. The survey included responses from 745 federal employees, with representatives from at least 36 federal and defense agencies. The poll has a margin of error of plus or minus 4 percentage points.

NEXT STORY: Does Your Job Make You Miserable?