New analysis shows some long-held Congressional seats now up for grabs may change the course of federal spending, especially in technology and aerospace.

With the Nov. 8 election just a week away, a new report by big data and analytics firm Govini shows how the outcome of highly-contested races in five key battleground states may affect federal spending in those states.

“An often overlooked but significant outcome of the presidential campaigning is the impact it has on down-ballot races for the House of Representatives. In the 114th Congress, Republicans had a 59-seat advantage over Democrats, but this could change as more races featuring Republicans as incumbents are being forecasted as ‘toss-up’ than races featuring Democrats as incumbents,” according to Govini, based in Arlington, Va.

The battleground states most in play are:

According to Govini's analysis, Virginia and Colorado have the highest "bacon score" among the five states, a measure based on the dollar value of federal contracts performed in each congressional district per resident. It indicates how successful lawmakers are in “bringing home the bacon” per capita.

While Virginia is the leading state by share of contract obligations, it could lose that status to California in the near future, the firm reported. According to Govini, the state "is in the midst of a transition toward improving integration of information technology with its existing industrial base. Companies driving the transition, based mostly in Northern Virginia and the Norfolk area, will require the support of lawmakers for the state to maintain its leading status." The race between Republican incumbent Barbara Comstock and LuAnn Bennett in Virginia's 10th District is especially notable, the report said.

In Colorado and Florida, where the aerospace industry is undergoing significant growth, Republican incumbents Mike Coffman and John Mica, respectively, are in tight races "that could change the balance of power in each state," Govini said.

In the rustbelt states of Pennsylvania and Ohio, especially hard hit during the economic upheaval of the last decade, federal investments in science and technology are widely viewed as key to boosting manufacturing, transportation and other sectors.

The image below illustrates Govini's "bacon score" by congressional district in each of the five states. 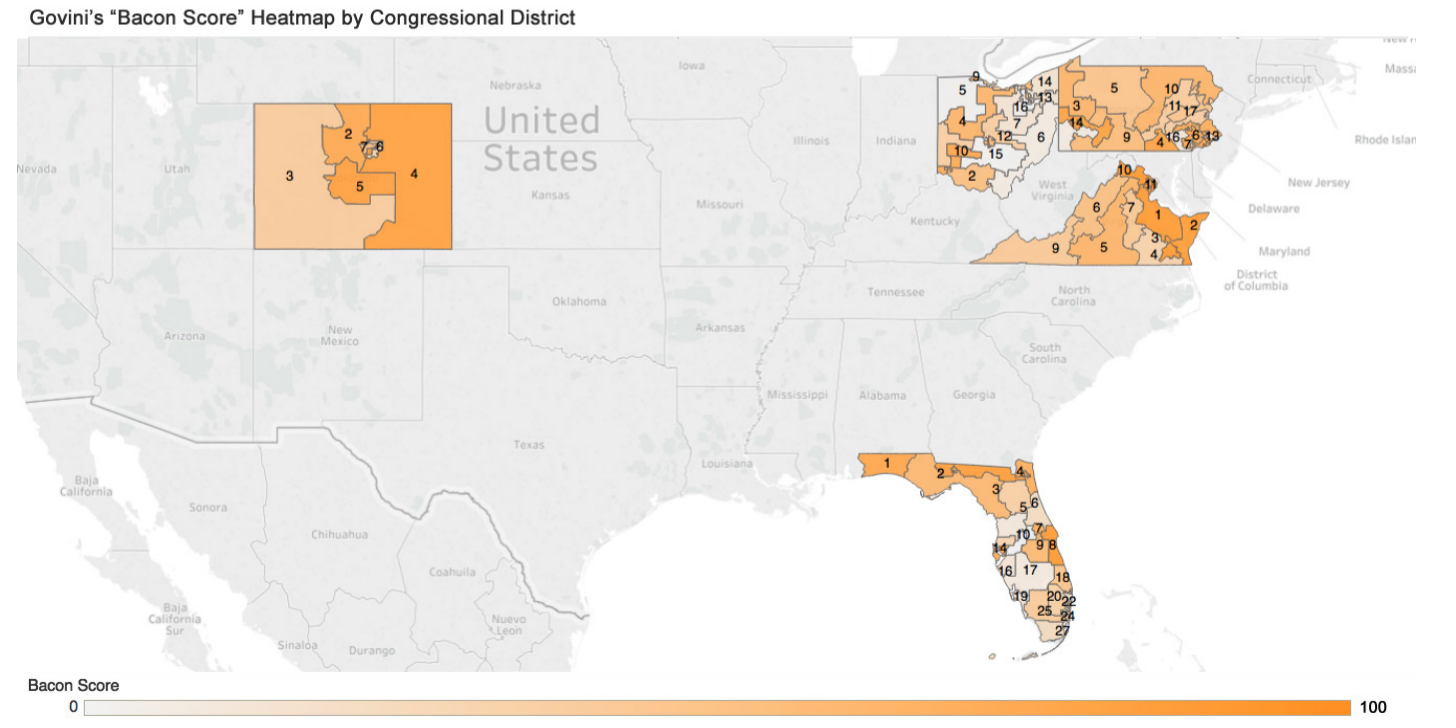 NEXT STORY: The Feedback Loop of National Upheaval and Personal Anxiety