More than 55 percent said his controversial comments are unacceptable for a presidential candidate.

Nearly half of federal employees think Donald Trump is a bigot, according to a new poll. 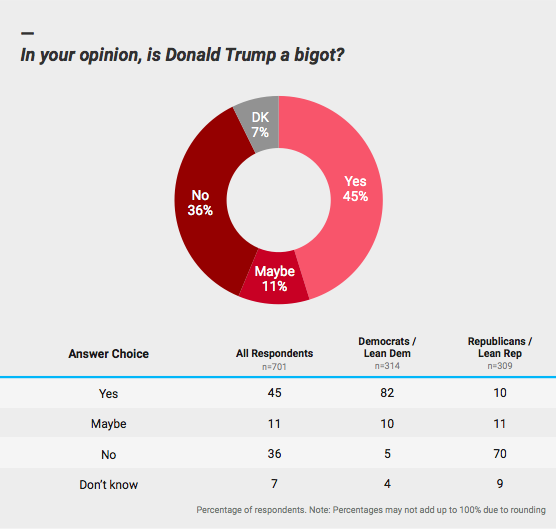 Federal workers were more confident Trump’s controversial comments -- including those aimed at immigrants, LGBT individuals, women and the disabled -- were inappropriate. Fifty-five percent of respondents said those comments were “unacceptable for a presidential candidate.” Another 13 percent said his comments are “occasionally offensive” but should not impact his overall candidacy.

Twenty-eight percent of feds said Trump’s more notorious remarks were a “refreshing departure from the current standards of political correctness.”

The Republican nominee's comments may have affected his standing in the federal workforce; 64 percent of respondents said they view the candidate unfavorably.

The poll was sent to a random sample of Government Executive subscribers from July 12-18. 768 federal employees, representing over 30 civilian and defense agencies, completed the survey. Of those, 33 percent said they identify as Democrats, 30 percent as Republicans, and 28 percent as independent (independent respondents leaned Republican by a 44 percent to 35 percent margin). The margin of error is plus or minus 4 percent.

Click here to see how federal employees evaluated Hillary Clinton’s handling of her emails while she served as State Department secretary, and stay tuned for more of Government Executive’s exclusive coverage of this poll. Full survey results are available here.

NEXT STORY: Body Language You Should Borrow From Your Dog and Use On Your Boss