Small independent agency struggles to keep up with unprecedented workload.

When Bob McDonald was sworn in as secretary of the Veterans Affairs Department, one of his first promises was to protect the employees who aimed to shed a light on waste or wrongdoing within the agency.

“At VA, we take whistleblower complaints seriously and will not tolerate retaliation against those who raise issues which may enable VA to better serve veterans,” McDonald said in September 2014, shortly after being sworn in as secretary. “We depend on VA employees and leaders to put the needs of veterans first and honor VA’s core values of integrity, commitment, advocacy, respect and excellence.”

Now in year two of his tenure, McDonald appears to have succeeded at least in creating a culture in which whistleblowers feel comfortable reporting inappropriate behavior. While whistleblower disclosures have climbed in recent years, they skyrocketed in fiscal 2015. The uptick, according the Office of Special Counsel, a small, independent agency tasked with protecting whistleblowers and federal employees from improper personnel actions, has been driven in large part due to an onslaught of new cases from VA.

The numbers are staggering, and to some represent a reality far different than the one McDonald describes when he depicts a department well on its way to fixing the widespread, systemic shortcomings that have embroiled the VA since they were unveiled -- by whistleblowers -- in 2014.

“This uptick in VA whistleblower cases proves that instances of misconduct and retaliation are still all too common within the department,” said Rep. Jeff Miller, R-Fla., chairman of the House Veterans Affairs Committee, “which is why our committee will remain vigilant in our oversight of VA. Thankfully, under the leadership of Special Counsel Carolyn Lerner, the Office of Special Counsel has had a successful track record of intervening to stop retaliation against VA whistleblowers in a number of high profile and important cases.”

VA’s contribution to OSC’s workload has not just come from whistleblowers. Employees at the department filed 1,400 claims of prohibited personnel practices last fiscal year, a 41 percent increase over 2014. Miller said his concern lies largely with VA’s retaliation against whistleblowers, an area in which OSC has also focused. Eight of every 10 favorable actions OSC won for federal employees last year involved reprisal.

“When VA leaders refuse to discipline those who retaliate against whistleblowers,” Miller said, “it sends a dangerous signal that retaliation has no consequences. If efforts to reform the department are to ever be successful, VA leaders must fix this injustice.”

To others, the growth of whistleblower and other cases at OSC does not necessarily reflect a proportional escalation of malfeasance in government, but instead a renewed culture in which employees feel safer calling out problems at their agencies.

Under OSC’s previous leadership, said Tom Devine, a whistleblower advocate and legal director at the Government Accountability Project, those with stories to tell about waste, fraud and abuse in government developed a cynicism toward the system. Lerner’s predecessor, Scott Bloch, was forced out of his job -- and later pleaded guilty in court -- after he withheld information from Congress. The job was vacant for three years before Lerner took over.

“Whistleblowers are generally willing to stick their necks out if they think it’ll make a difference,” Devine said. Since Lerner became head of OSC, he added, they have renewed confidence they can do so.

The numbers support that theory; since 2011, when Lerner took over, total cases at OSC have increased by 52 percent. OSC attributes this to the precedent set in recent years. 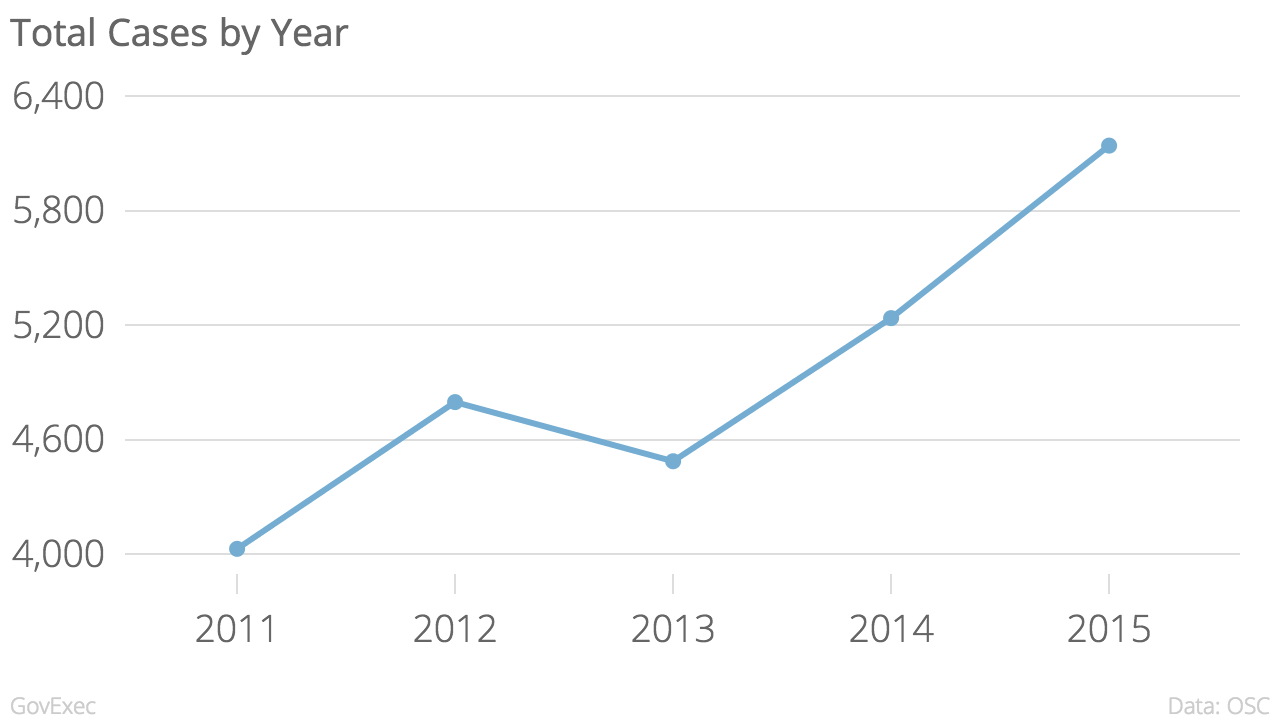 “As OSC obtains more positive outcomes for whistleblowers,” said Nick Schwellenbach, a spokesman for the agency, “our results promote confidence and more employees are willing to step forward to file a claim or make a disclosure of wrongdoing.”

Even as OSC’s workload has increased, the success rate for those bringing cases to the agency has picked up even more rapidly. It resolved 278 cases favorably for employees in fiscal 2015, a nearly 60 percent increase over the previous year, and a more than 800 percent increase since fiscal 2008.

The spike in cases has not been easy for OSC, an agency of about 140 employees, to handle. Congress increased its budget in the recent omnibus spending bill by 5 percent to $24.1 million, but the agency said that boost does not keep pace with inflation or the inundation of new cases. Schwellenbach said the agency plans to hire more staffers to take on the backlog of cases, which has ballooned in recent years but remained stagnant in fiscal 2015.

About 2,000 cases were still outstanding at the beginning of October, and OSC has warned Congress that number could grow even with the funding increase. While the caseload has doubled since 2008, the OSC budget has increased just 31 percent in the same timeframe.

The tide could be turning in OSC’s favor, as advocates and lawmakers alike see the value in OSC funding. Even Miller, a fiscal conservative and supporter of a balanced budget amendment, has written letters to the House Appropriations Committee to voice his support for increasing the OSC budget. To many, spending at the agency represents an opportunity for a strong return by rooting out waste and abuse.

“It’s less of a traditional cost,” said GAP’s Devine, “and more of an investment in improving government efficiency.”