Among Democrats, more than 40 percent say they might leave under President Trump, poll finds.

Donald Trump leads the Republican field among federal employees, but many still say they would never work for him.

One in four federal workers would consider leaving their jobs if Trump were elected president, according to a new survey conducted by the Government Business Council, Government Executive Media Group’s research arm. About 14 percent of respondents said they would definitely consider leaving federal service under President Trump, while an additional 11 percent said they might. The findings indicate those leaving government would come from agencies' top ranks, as a majority of respondents were in General Schedule positions GS-13 and higher.

Overall, 8 percent of respondents said they “don’t know” if they would consider leaving their jobs if Trump prevails in November. 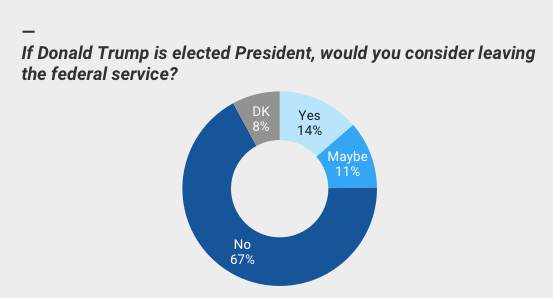 While a Trump victory may cause a mass exodus of Democrats working in federal government, they are quite happy with their current boss. A majority (56 percent) said they would support him over their current field if he were eligible to serve a third term. Just 37 percent said that given the chance, they would not vote for Obama again. 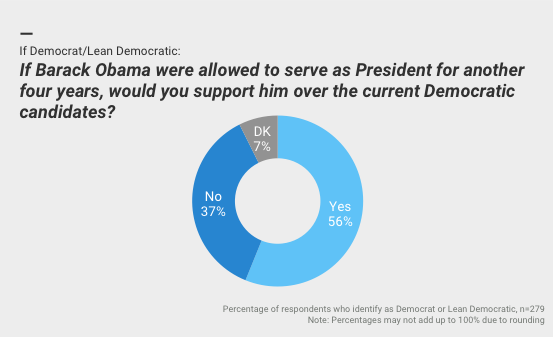 While one-quarter of the federal workforce might quit their jobs or retire if Trump were to lead the executive branch, a majority -- about six in 10 -- would be “embarrassed” to have him as their boss. About half of respondents said the same of Hillary Clinton, compared to 45 percent for Sen. Ted Cruz, R-Texas, and 37 percent for Sen. Bernie Sanders, I-Vt. Just one in five said the same of Sen. Marco Rubio, R-Fla.

Respondents in equal measure – 27 percent – said they would be “proud” of serving under a President Sanders or Clinton, edging out the top Republicans.

The poll was sent to a random sample of Government Executive print and online subscribers from Jan. 20-26; 688 federal employees, representing over 30 civilian and defense agencies, completed the survey. Of those, 35 percent identify as Independents, 28 percent as Democrats, and 26 percent as Republicans. The margin of error is plus or minus 4 percent.