The federal government’s top civil servants are no longer serving in the role designed for them, according to a new report, leading the executives to receive less training and development than is necessary.

There is a significant “divide between the original vision of the [Senior Executive Service] and the practice,” the Merit Systems Protection Board found in its report. As agencies have abandoned the initial prescription for the corps of top civilian managers, they have treated training and development as a “discretionary activity” rather than a “necessary investment,” the report said.

Just half of senior executives said they have their own executive development plan, while 30 percent said their development needs are not met. On a governmentwide basis, administrations have failed to create a systemic way to train and develop the SES, according to MSPB.

As imagined in the 1978 Civil Service Reform Act, the SES would be a go-between for political appointees and the career corps. A senior executive would be fluent in “fundamental competencies,” MSPB wrote of congressional expectations, essentially experts in management -- or “executive corps qualifications.” Today, however, just 21 percent of SESers say their job could be done without the technical skills they possess.

That gap has necessitated a major overhaul of the service, MSPB said.

“If there are fundamental differences between the vision of how the SES was to function (e.g., governmentwide mobile corps of executives) and how the SES actually function,” the independent agency wrote, “it may be time to examine what the executives’ roles, duties, and responsibilities should be to meet present and future challenges.”

Building an SES with core competencies will require an increase in training and development, MSPB said, which is currently lacking. Both activities are equally important, according to the report; training refers to the practice of making employees better at their current jobs, while development prepares them for future opportunities. Federal statute places executives in charge of their own development, but MSPB noted the onus falls on agencies to provide the necessary tools. A lack of time, funding and commitment have contributed to insufficient training and development, MSPB found, as demonstrated in the chart below of the perceptions of SES employees. 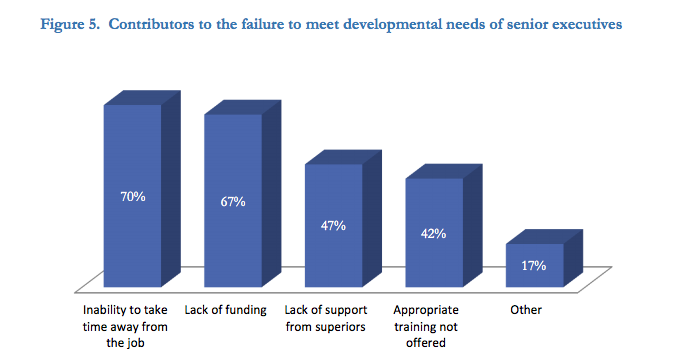 Agencies spent $57 million on external executive training between fiscal years 2008 and 2012, but MSPB said they should improve how they measure each method’s effectiveness. Tracking the trainees’ reactions, the changing of attitudes and pre- and post-testing can help make those determinations. This chart from MSPB shows SESers’ own assessments of the usefulness of various training methods.

MSPB also noted some aspects of leadership are inherent to an individual’s character, and therefore cannot be taught.  There remains, however, value in training, the report said.

“Research suggests that the answer to the nature vs. nurture question is that leaders are both born and made,” MSPB wrote. “There is a genetic as well as an environmental component (e.g., family experience, work experience) associated with those who hold leadership positions.”

The board also encouraged top leadership at each federal entity to support training and hold senior executives accountable for developing their employees. Agencies should link participation in leadership development programs to performance management, rewards and recognition, MSPB said. It also recommended requiring an executive development plan for every member of the SES, and for the executives to be directly involved in their creation.  After new training is created, MSPB said, SESers should be given time to both participate and reflect upon and put into practice what they learned.

NEXT STORY: The FDA Releases New Policy on Blood Donations From Gay Men