For starters, it never hurts to be backed by nearly all the world's gold.

It must be wonderful to be so desirable at age 100.

Yes, it was in late 1914 that the U.S. Federal Reserve note , the official incarnation of the U.S. dollar, first shot from the U.S. Treasury’s Bureau of Printing and Engraving.

There’s been little official fanfare. But the dollar itself has spent its centenary year pulverizing the competition and turning global markets upside down .

This is all the more remarkable given the dire warnings about the dollar’s health over the last few years. Economists and financial talking heads—mostly of a conservative, monetarist stripe—have continually cautioned that the Federal Reserve’s efforts to resuscitate the U.S. economy by creating loads of money from thin air and using it to buy bonds would ultimately undermine the dollar, set off a wave of inflation, spook global investors, unhinge interest rates, saddle the Treasury with crippling interest payments, and cause the U.S. economy to once again stall.

These folks—here are some of the leaders among them —have been completely wrong. But to understand why, you really have to understand the history of American money. And what better time for that than the dollar’s 100th birthday?

Of course, the U.S. had paper currency before 1914. The earliest, the continental dollar , was printed to keep the lamps lit in the first days of the republic. But it collapsed amid hyperinflation in the 1780s.

For nearly a century after that unsightly episode, the U.S. currency system was a mishmash of private banknotes issued by state-chartered banks, specie coins issued by the Treasury, and foreign coins and banknotes. It didn’t work particularly well. Private banknotes were fine in the general vicinity of the issuing bank, but they were only accepted at a discounted rate further afield .

A bank note issued under the National Banking System, which prevailed until 1913 (Federal Reserve)

It wasn’t until the 1860s, in the midst of the U.S. Civil War, that the federal government gave printed money another full-fledged try. But until the Federal Reserve Act of 1913, the system was still a bit of a mashup, with individual banks also printing their own currencies.

The system still had a lot of problems. Foremost was its tendency to go spectacularly bust—see 1873 , 1884, 1890, 1893 and 1907—and sink the U.S. economy into sometimes deep recessions. After J.P. Morgan organized a massive bailout during the panic of 1907 , the government decided that relying on the kindness of private bankers probably wasn’t the best policy. A few years later, the Federal Reserve Act of 1913 created the U.S. central bank, and endowed it with the ability to “furnish an elastic currency.” (Essentially, that meant the central bank could expand the money supply as needed to prevent creeping doubts about the availability of cash from turning into destructive runs on the banks.)

Still, that didn’t immediately make the dollar the reserve currency—the default for international transactions—that it is today. The pound sterling had held that spot since 1821, when Britain reinstated the gold standard at a fixed rate after the Napoleonic wars. Countries using the gold standard agreed to make the value of their currency equal to a fixed amount of gold. The U.S. didn’t join the gold standard until 1870s.

Thus, though the U.S. economy had overtaken Britain’s around 1870, London remained the center of world finance in 1914. Corporations and governments flocked to the City’s banking houses to raise money. Brazilian coffee farmers shipped their products to Spanish restaurants, and took payment in pounds by calling at the London offices of their bankers. Japanese importers of Henry Ford’s cars paid for them in London with bills of exchange.

The Number of U.S. Dollars per British Pound 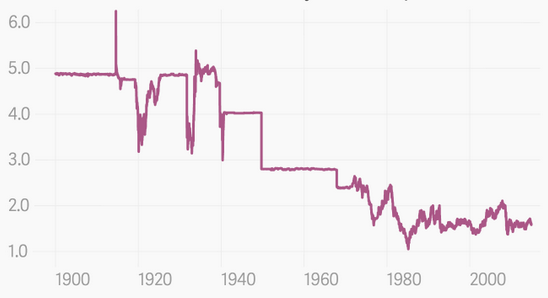 It took the First World War to bring the dollar to preeminence. In wartime, countries would typically abandon the gold standard, and pay military expenses with freshly printed paper money, usually resulting in a spiral of inflation. When the war hit Europe in 1914, most of the warring countries abandoned the gold standard.

Britain held on, reasoning that going off gold would devastate the City of London. But since the U.S. didn’t enter the war until 1917, it had more money to lend than the U.K., where the war effort was devouring every scrap of spare capital. Countries like Canada, Chile, Argentina, and Switzerland began to borrow in the U.S., by selling dollar-denominated bonds designed to appeal to U.S. investors.

As the war dragged on, Britain went from lender to borrower. And after the dollar-denominated Angl0-French loan of October 1915—organized by JP Morgan to fund the allied European powers—"the U.S. dollar no longer took a backseat to the British pound,” wrote William Silber, an NYU professor and author of a book on the origins of the dollar as a reserve currency.

The dollar gained further prestige when the U.K. was suddenly forced off the gold standard in 1919, inflicting large losses on international merchants with British bank accounts full of pounds. By the time the U.K. went back to gold in 1925, the damage was done. The dollar had become the world’s leading currency.

In World War II, much as it had during World War I, the U.S. benefitted from its late entry into the fray. It spent much of the early part of the war shipping exports to the Allies, and collecting much of their gold as payment. After the war, it was impossible to reconstitute the gold standard mostly because the U.S. owned almost all the world’s gold.

So instead of basing the world monetary system on gold, the advanced economies based their currencies on the U.S. dollar. The dollar was still linked to gold, meaning foreign government central banks could, in theory, redeem exchanged dollars for U.S. gold whenever they wanted. Under this system—the post-war arrangement known as Bretton Woods—the exchange rates to the dollar were fixed at a certain price, but there was some leeway for devaluation if necessary.

There was, however, an inherent tension in this system. Under the Bretton Woods system, most countries—besides the U.S.—operated with trade surpluses: They exported more than they imported. As a result, they ended up with growing piles of dollars. (The Chinese have a similar situation today.) They needed a place to put these dollars. The only financial market big enough to absorb them was the market for U.S. Treasury securities. In other words, these countries were all lending money to the U.S..

That encouraged the U.S. to run large deficits and build up its foreign debt. Eventually foreign lenders began to doubt, rightly, whether it could cough up all the gold they were theoretically entitled to. That’s why president Richard Nixon snipped the last strand of a linkage between gold and the U.S. dollar in the early 1970s.

The early days of the post-gold world were rough. At moments in the 1970s, the value of the dollar fluctuated wildly, amid fears about rampant U.S. inflation.

But since then, the U.S. currency has only seemed to grow more central to the world financial order. More cross-border trade and financial flows are now settled in dollars than ever before. And it remains by far the most popular currency for countries to stash their national savings.

There are many theories why. The sheer size of the U.S. economy. The dominance of U.S. financial markets. But it’s also just sheer inertia. Only the U.S., after the two world wars, had the large, open financial markets that a reserve currency requires. And the U.S., unlike Japan and Germany, did not try to protect its export sector by dissuading foreigners from holding its currency. (Switzerland, whose franc is often thought of as a junior reserve currency, is doing just that at the moment .) So the dollar became, and stayed, the default.

More broadly, the dominance of the dollar also stems from those squishy, somewhat mystical elements of financial markets: Confidence and trust. This is where economics blurs with philosophy and sociology. Perhaps some of the best thinking on these topics was done by George Simmel in his 1907 opus, the Philosophy of Money . In it, he posits that that the usage of money is, essentially, a mechanism of spreading trust throughout an ever-widening circle of anonymous individuals. (A 2001 article from the Journal of Economic Issues summed up Simmel’s thinking on money.)

The last few years have seriously tested that trust in the U.S.-dominated economic order. The country suffered its most drastic economic collapse since the Great Depression. The staid Federal Reserve undertook an extreme quantitative easing policy. U.S. political brinkmanship pushed the country uncomfortably close to default. Yet none of it dented the dollar’s credibility. It’s very difficult to imagine, these days, what would.

NEXT STORY: Bilinguals Have Stronger, Faster Brains Than The Rest of Us