sponsor content
Building Cyber Resilience to Respond to the Rise in Third Party Cyberthreats
Skip to Content
Get the latest on need-to-know topics for federal employees delivered to your inbox.
View Privacy Policy
Featured eBooks

Management
Feds Are Feeling More Out of Touch With Their Managers

Employee satisfaction with communication from agency leaders has declined steadily in the past four years, the nonprofit Partnership for Public Service reported on Wednesday.

Sixty percent of agencies for which data are available registered a decrease in satisfaction with leadership communication from 2009 to 2013, with the governmentwide index score for satisfaction falling 3.9 points to 50.2 out of 100, according to the group’s new analysis of responses to three questions on the 2013 Federal Employee Viewpoint Survey. 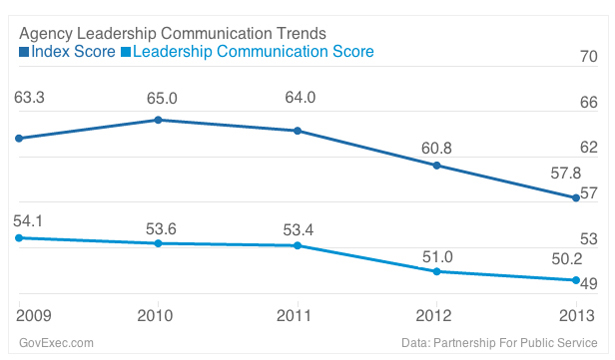 On the question of satisfaction with information from managers about what is going on within agencies, the governmentwide score sunk to 44.8 percent positive. That compares with 60 percent satisfaction rates in the private sector, according to the Hay Group.

The governmentwide score on whether leaders communicate on goals and projects with different agency units dropped from 54.5 in 2009 to 48.2 in 2013, the study found.

Managers rated the highest in the category of communicating the goals and priorities of the organization, with a governmentwide score of 57.5 in 2013, down from 59.7 in 2009.

The top-ranked agencies in communications by leaders for 2013 were NASA, the Intelligence Community and the Treasury Department. The worst communicators were the Homeland Security, Interior and Agriculture departments. 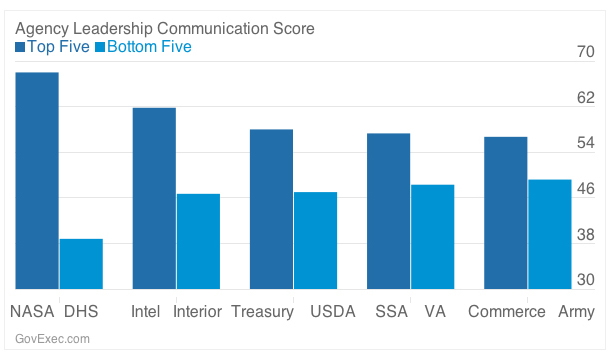 As a model, the study cites the Federal Deposit Insurance Corp., which “established leadership communication as a key agency priority by launching regular initiatives that put employees directly in contact with the agency’s leaders on a regular basis.”

The analysts also recommended multiple communications platforms. At the U.S. Mint, “while the public affairs office leverages electronic communications such as an internal television network and an online question and answer box, it also provides print-outs of online content in common areas to ensure that all employees have access to information from agency leadership.”

NEXT STORY: How I Lead: Building Trust and Communication Between Teams