These tax 'preparers' are making a lot of mistakes, GAO finds.

A majority of “preparers” who help individuals file their taxes are not regulated by the Internal Revenue Service, according to a new report, and they are often putting filers at risk by submitting incorrect returns.

Tax preparers are either “enrolled” -- generally meaning they are certified to some degree -- or “unenrolled.”  About 55 percent of paid preparers are unenrolled, according to the Government Accountability Office audit . The IRS attempted to regulate the unenrolled preparers in 2009, but a federal court said it did not have the authority to do so, a decision that was upheld in the U.S. Court of Appeals in February.

Here is a flow chart to demonstrate the types of preparers: 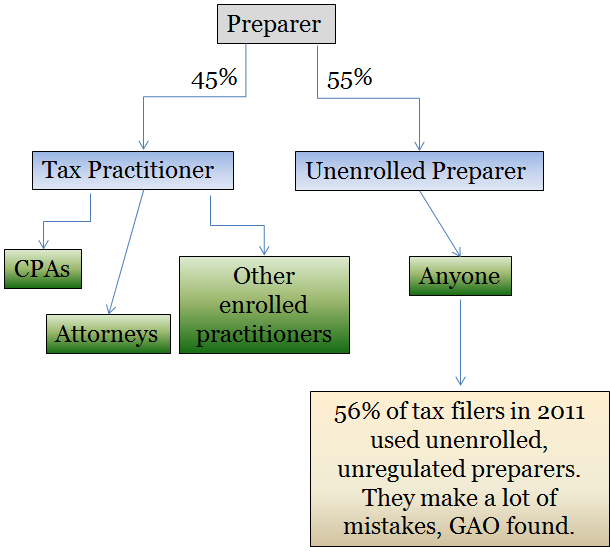 As the chart shows, 56 percent of tax filers in 2011 used the unenrolled preparers. GAO sent undercover auditors to 19 of these preparers and presented them with a variety of scenarios to test their accuracy in filing taxes. In this sample, just 2 of 19 -- or 11 percent -- of the tax professionals calculated the correct number for the individual’s tax return. The preparers’ errors included not counting non-salary income such as tips, claiming ineligible children for the Earned Income Tax Credit and not asking questions they were legally required to ask of the filer.

These mistakes, which ranged from telling individuals they owed $52 less than they actually did to getting a refund of $3,718 more than they were entitled to, put both the preparers and the filers “at risk of IRS enforcement action,” GAO said.

“Taxpayers rely on paid preparers to provide them with accurate, complete, and fully compliant tax returns,” GAO wrote in its report. “However, tax returns prepared for us in the course of our investigation often varied widely from what we determined the returns should and should not include, sometimes with significant consequences.”

While GAO conceded the sample was limited and not necessarily representative, auditors provided data to back up their findings. The IRS’ National Research Program found from 2006 through 2009, unenrolled preparers made errors 60 percent of the time. This outpaced even individuals who filed their own returns, just half of whom made errors.

Tax filers pay a significant price tag for these flawed returns; the sample of preparers charged GAO between $160 and $480 for their services.

President Obama proposed in his fiscal 2015 budget blueprint to provide the IRS statutory authority to investigate and regulate the unenrolled preparers. Just four states currently do so on their own, and in the state with the strongest regulations -- Oregon -- mistakes on tax returns occur less frequently, according to GAO.

“Providing IRS with the necessary authority for increased oversight of the paid preparer community will help promote high-quality services from paid preparers, will improve voluntary compliance, and will foster taxpayer confidence in the fairness of the tax system,” the auditors wrote.

NEXT STORY: Hillary Clinton's New Book Title Has Already Been Used by a Former Secretary of State