Management
Not Many College Students Are Interested in Federal Service

Less than 6 percent of college students list the federal government as their ideal career, according to a new survey .

The federal government already has a dearth of young employees, with workers younger than 30 making up just 8.5 percent of its workforce, compared to 23 percent of the country’s overall workforce.

Federal agencies can improve their recruiting efforts by engaging college students and helping them navigate the application process for federal jobs, according to the Partnership for Public Service’s analysis of data from the National Association of Colleges and Employers. Even among students who said federal employment was an ideal career, 35 percent said they did not use USAJobs.gov in their job search. Less than 9 percent of all college students searched on USAJobs, compared to more than 17 percent who used LinkedIn.

Interest in public-sector work has declined across all levels of government, falling for the fifth consecutive year to just 5.4 percent who said they were planning to go directly from college to a government job. That number was just 2 percent for federal positions.

About 12 percent of students who have interned within the federal government planned to go directly into a federal job, and 21 percent said it was an ideal career.

In addition to recruiting deficiencies, lower starting salaries inhibited federal agencies from attracting top candidates. A majority of students surveyed said they expected to make more than $40,000 in their first job, though the Partnership estimated starting salaries for college graduates in the federal sector to range from $32,000 to $42,000.

This problem was amplified for students in science, technology, engineering and mathematics, PPS found, and agencies will likely “continue to struggle to meet salary expectations for STEM talent.”

To help overcome the pay obstacle, federal agencies should emphasize their generous benefits packages and employees’ ability to grow within the agency, which students ranked very highly among factors they consider when job searching. Agencies must then follow through on that promise, PPS said, by improving recognition of good work and ensuring skills development throughout their employees’ careers.

The report, based on a survey of 37,874 students across the country, found students who studied political science or history, environmental science and foreign language were most likely to pursue a career in federal service. Those majoring in education, visual and performing arts, health care, English and business were among the least likely to list federal government as their ideal career.

Here’s a breakdown of the percentage of college students who selected federal service as their ideal career by major: 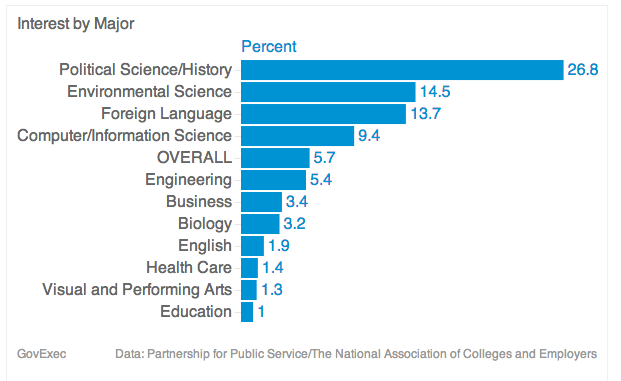 NEXT STORY: 5 Ways to Stay Sane When You Have to Slog Through