About one in six Americans identified government as their top concern last year.

The country’s No. 1 problem in the year that just passed was its government, according to a new survey.

The Gallup poll found for the second consecutive year, more Americans identified Uncle Sam as the “most important problem facing the United States” than any other issue. An average of 16 percent of respondents selected government, followed by 13 percent who said the economy, 8 percent who chose unemployment and 8 percent who selected immigration. 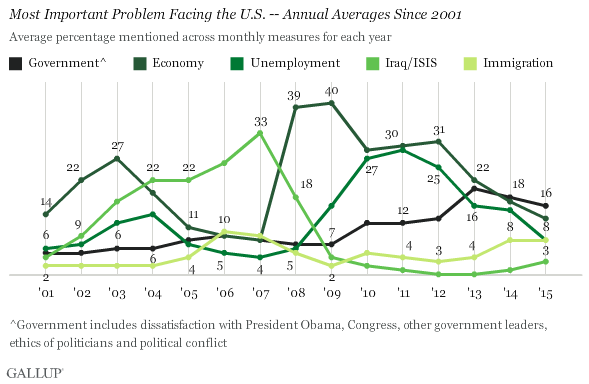 In 2013, government was the second most common answer on the year-end biggest problem survey, while it was third in 2011 and 2012. The poll lumped together several elements of the federal government, including President Obama, Congress and federal agencies.

The yearly averages from Gallup’s poll represent the combined results from a total of 12,000 respondents and have a 1 percent margin of error.

NEXT STORY: Why Paul Ryan Didn’t Shut Down the Government