One in three new federal hires in fiscal 2014 were veterans, marking the highest-ever hiring rate for former military personnel, the Office of Personnel Management announced Monday.

Federal agencies have hired an increasingly higher percentage of veterans since President Obama signed an executive order in 2009 creating the Veterans Employment Initiative, which aimed to boost veterans in civil service positions by creating a liaison at every agency to recruit them. Those individuals and OPM officials have served to educate former service members on opportunities that match their skillsets and to help them adjust to civilian culture.

The order created the President’s Council on Veterans Employment, made up of representatives from every Cabinet-level department and other independent agencies, and is co-chaired by Labor Department Secretary Thomas Perez, Veterans Affairs Department Secretary Bob McDonald and OPM Director Katherine Archuleta.

“I am confident that together this council is doing what is needed to achieve the president’s objectives and establish the foundation for ongoing and sustainable progress for our veterans for years to come,’’ Archuleta said.

Many of the hires have taken place at VA itself.

“We know that veterans possess character, team-building skills, and discipline,” McDonald said. “Those traits don’t stop when we take off the uniform.” He added vets working at VA are “providing better outcomes and better service to their fellow veterans.”

Prior to the initiative, veteran hiring had stagnated. Between fiscal years 2003 and 2007, it rose just 0.5 points from 25 percent to 25.5 percent. Generally -- both before and after Obama’s order -- veterans eligible for hiring preferences accounted for more than 80 percent of all veteran hires.

The chart below shows the percentage of all new hires that were veterans since fiscal 2007. 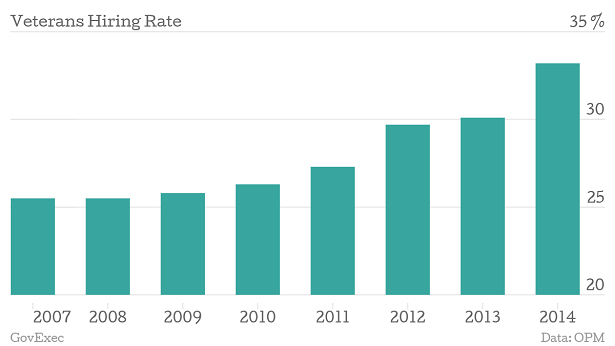