Most Americans Now Back Ground Troops Against ISIS

The Islamic State's brutality has dramatically shifted public opinion in the United States.

By Adam Chandler
The Atlantic

Barack Obama's closing remarks at the summit on Countering Violent Extremism on Wednesday were notable not only for the president's avoidance of words like "Islamic" and Muslim," but also for their emphasis on ISIS. The terrorist group merited a dozen mentions, more than double that of its rival, al Qaeda. "ISIL is terrorizing the people of Syria and Iraq, beheads and burns human beings in unfathomable acts of cruelty," Obama said. "We’ve seen deadly attacks in Ottawa and Sydney and, Paris, and now Copenhagen."

The group's confounding brutality (see The Atlantic's March cover story for more about that) has also made a profound impression on the American public, gradually turning a seemingly war-weary country in favor not only of airstrikes against the group, but also, according to a new CBS News poll , the deployment of ground troops. "For the first time, a majority of Americans (57 percent) favor the U.S. sending ground troops into Iraq and Syria to fight ISIS," CBS reported.

The results track with the general sentiment that ISIS is "a major threat" to the United States, which rose from 58 percent in October to 65 percent earlier this week.

This uptick dovetails with a Gallup poll released on Wednesday in which terrorism increased six percentage points among issues listed by Americans as the most important problem facing the United States. Terrorism, as a national priority, is still fifth behind other listed problems, but it experienced the biggest gain between this year and last. 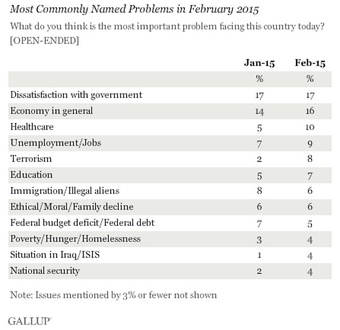 As Gallup pointed out, this was "the highest percentage to mention the issue since January 2010." (That 2010 poll came just weeks after the attempted Christmas Day bombing of an airplane over Detroit.)

Eight percent of Americans citing terrorism as the country's biggest issue doesn't seem like a lot, especially when compared with the 57 percent of Americans who now say they support sending ground troops to Syria and Iraq. But when you combine "terrorism" with "national security" and "Iraq/ISIS," the category comes just one point behind dissatisfaction with the government.

Last week, with a majority of Americans behind him, President Obama sent draft legislation to Congress to authorize the use of military force against ISIS. The authorization would include "limited" approval of ground troops for up to three years.

NEXT STORY: White House Struggles with the Language of Terrorism