The military fears the footage could assume iconic status throughout the Muslim world. 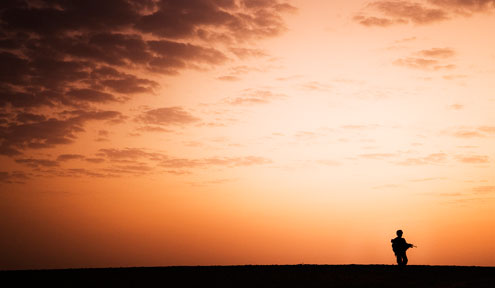 The Pentagon opened a formal probe into a video showing Marines in Afghanistan urinating on the corpses of Taliban fighters, but the move may not be enough to prevent the footage from becoming one of the defining images of the long and deeply unpopular Afghan War.

The probe formally unveiled by Defense Secretary Leon Panetta on Thursday came less than a day after the video began widely circulating over the Internet . It's not clear when the video was filmed, or in precisely what part of Afghanistan, but Marines have had primary responsibility for the volatile southern provinces of Helmand and Kandahar for several years. Gen. James Amos, the commandant of the Marine Corps, said he'd asked that the "Naval Criminal Investigative Service pull together a team of their very best agents and immediately assign them responsibility to thoroughly investigate every aspect of the filmed event." Amos said he's also assigned a Marine general to conduct a parallel probe.

"I have seen the footage, and I find the behavior depicted in it utterly deplorable," Panetta said. "This conduct is entirely inappropriate for members of the United States military and does not reflect the standards or values our armed forces are sworn to uphold. Those found to have engaged in such conduct will be held accountable to the fullest extent."

Panetta's comments were unusually strong and seemed to indicate that the Marines involved, once identified, would automatically be disciplined rather than left to the military's judicial system. The tone and substance of his remarks stem from the military's growing fears that the video could quickly assume iconic status throughout the Muslim world, joining other infamous imagery like the laughing American soldiers humiliating Iraqi prisoners at the Abu Ghraib prison and the orange-jumpsuited prisoners shown kneeling in black-out goggles at the Guantanamo Bay prison camp.

The Afghan video is of particular concern because it has the possibility of becoming one of the dominant images of the war. U.S. night raids of Afghan homes, and inadvertent killings of Afghan civilians, are the primary sources of anti-American feelings within the country, but they've never been captured on film. The laughter and smirking of the Marines as they urinate on the corpses is also likely to further offend Afghans already disenchanted with the U.S.-led war effort in their country.

The video's substantive impact on the war effort is difficult to gauge. It could theoretically be a setback for the nascent peace talks with the Taliban, but those negotiations have already slowed to a crawl because the Taliban appear to believe they are winning the war and can simply wait out the U.S. forces slated to fully withdraw from Afghanistan by the end of the year. The video could also bolster anti-war feelings in the U.S. by persuading voters, already tired of the long and uncertain war, that continuing the conflict risks further debasing American troops. But with the military already leaving Afghanistan, the video is unlikely to speed that withdrawal in an election year.

Nevertheless, the video -- regardless of whether the Marines involved - seems destined to live on. It has been nearly a decade since the Guantanamo Bay images first surfaced, and they are still widely shown in the Arab and Muslim worlds. Pictures and videos, as the U.S. keeps unhappily discovering, leave an indelible mark behind.