Get the latest on need-to-know topics for federal employees delivered to your inbox.
View Privacy Policy
The Internet of Things Reaches Peak Hype

Are federal agencies being realistic about the promise and perils of the Internet of Things?

The Internet of Things (IoT) -- the tangled, immersive, and invisible web of cloud-enabled computing capabilities, built through the proliferation of sensors, mobile devices, intelligent infrastructure, and massive data centers -- has been touted as the most revolutionary technological innovation of the early twenty-first century. Experts predict IoT will likely disrupt the way we do business, the way we stay healthy, as well as the way we interact with government.

But many find themselves scratching their heads wondering, “How much of that is true and how much is just hype?” 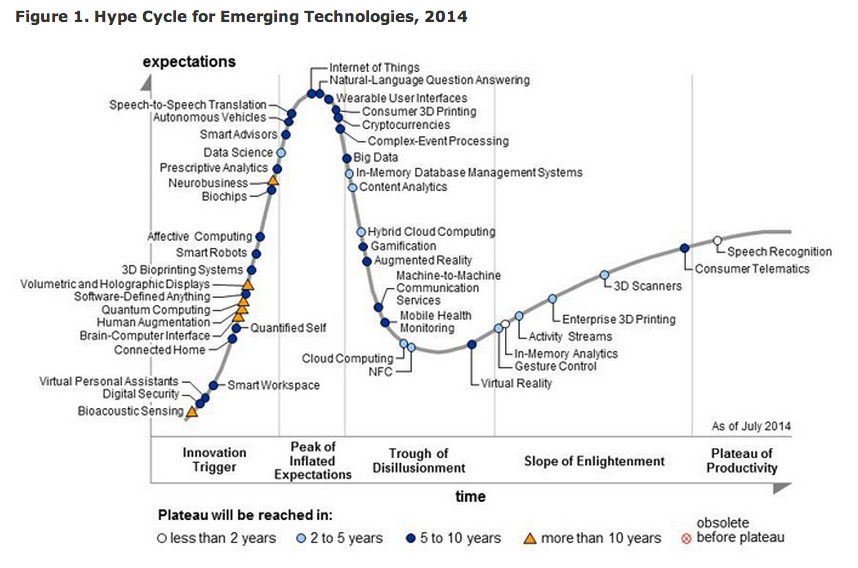 Gartner experts (as well as many surveyed as part of Pew’s “Digital Life in 2025” report) believe the Internet of Things is currently at peak hype. As a result, federal leaders should be cautious about forming unrealistic expectations regarding both the promise and the perils of IoT until the industry has had more time to mature.

According to Gartner, any emerging technology with the potential for market disruption begins in the “technology trigger” stage, during which industry experts, early adopters, and media outlets latch on to proof-of-concept stories despite the relative lack of commercially-viable products. Throughout this stage, high hopes build as the product receives more and more publicity and high-profile early success stories largely overshadow failures as the technology reaches its “peak of inflated expectations.”

Over the last half-decade, experts have proclaimed that IoT could revolutionize human social life in a myriad of ways -- from wearable sensors that track our heart rate and blood pressure, to “intelligent manufacturing” using autonomously-communicating systems to coordinate production and inform stakeholders, to microchips in milk cartons to tell us when it’s gone sour.

But after months or years of sky-high expectations, it’s almost inevitable that over time some early proponents will become disillusioned, say, after a leading firm fails to scale a promising prototype or once the true scope of a technology’s negative societal externalities becomes more readily apparent. At this point, the technology reaches the “trough of disillusionment.”

Sources seem to indicate that this is where IoT is heading next.

The global interconnectedness promised by the Internet of Things is both its blessing and its curse. With more and more vital systems becoming linked to the grid -- everything from pacemakers to nuclear power plants -- IoT makes our world increasingly hackable. The very fact that cyber criminals were able to exploit a defect in Target’s HVAC system to gain access to 40 million consumers’ financial information should warrant caution. Federal agencies are already spending billions to address the challenge of IoT-proofing their critical systems and infrastructure and will spend countless more as security threats evolve.

Similarly, the IoT could, as many have suggested, eliminate privacy as we know it and make the world a much more Orwellian place. Perhaps most elegantly conceptualized in Philip K. Dick’s “Minority Report,” the world of the Internet of Things could become a place where one’s consumer preferences, movements, and very identity are tracked via subdermal microchip or retinal scan with significant costs to individual freedom.

Despite the hopes and fears surrounding the Internet of Things, its true potential will rest neither on the heights of initial expectations nor the depths of disillusionment, but instead on how innovators choose to develop it once expectations come back down to earth.

In the stage known as the “slope of enlightenment,” the technology’s true impact takes shape as one or more market-leading firms begins offering unique and valuable enterprise-ready applications that reflect a more realistic understanding of the technology’s strengths and limitations.

3-D printing is one such technology currently climbing the slope of enlightenment toward maturity in the enterprise space -- having overcome both inflated hopes of printable organs as well as equally-inflated fears of printable weapons.

At this stage in the game, it is largely unclear how the Internet of Things will take shape as a mature technology (in contrast to the current trend toward linking every seemingly mundane household object to the Internet) and how citizens and government entities will navigate the complex socio-political challenges that will inevitably arise.

But as was the case for countless technologies that came before, creative thinking and a healthy dose of skepticism have allowed innovators to transform the stuff of science fiction into more innocuous facets of everyday life.

To learn more about how the federal government is preparing for the IoT-enabled future, check out some of GBC’s recent work:

“The Top 3 Challenges Limiting Mobility in the Federal Workplace”