Get the latest on need-to-know topics for federal employees delivered to your inbox.
View Privacy Policy
Does the Pentagon Have the Tools to Manage Upcoming Personnel Cuts?

DoD leaders may not have the data to make fully informed workforce decisions in the aftermath of a FY 2016 budget battle.

With the February 2nd release of President Obama’s FY 2016 budget, many are anticipating a showdown between the administration and Congress on defense spending that will almost certainly put thousands of DoD civilian jobs into jeopardy.

The President’s FY2016 baseline budget request allocates $534 billion for the Department of Defense, exceeding the spending caps set by sequestration by $35 billion. And, although it calls for increases to civilian pay and benefits, the budget request also reduces the civilian workforce by about 4,170 employees due to the end of the Afghanistan War. Meanwhile, some members of Congress have proposed slashing 115,000 DoD civilian jobs over the next five years, arguing that the civilian workforce has outpaced fighting forces.

Regardless of the outcome of this budget debate, DoD should anticipate a reduction of its workforce over the next year or more. Yet, as revealed at Defense One Summit last fall, Pentagon leaders may not currently have the tools to assess the competencies of its approximately 770,000 civilian employees, let alone manage a potential wave of personnel cuts.

A 2014 Government Business Council research study* of 437 defense and intelligence community leaders shows that when it comes to collecting information on employees, 60% say that their organization gathers competencies informally or not at all. 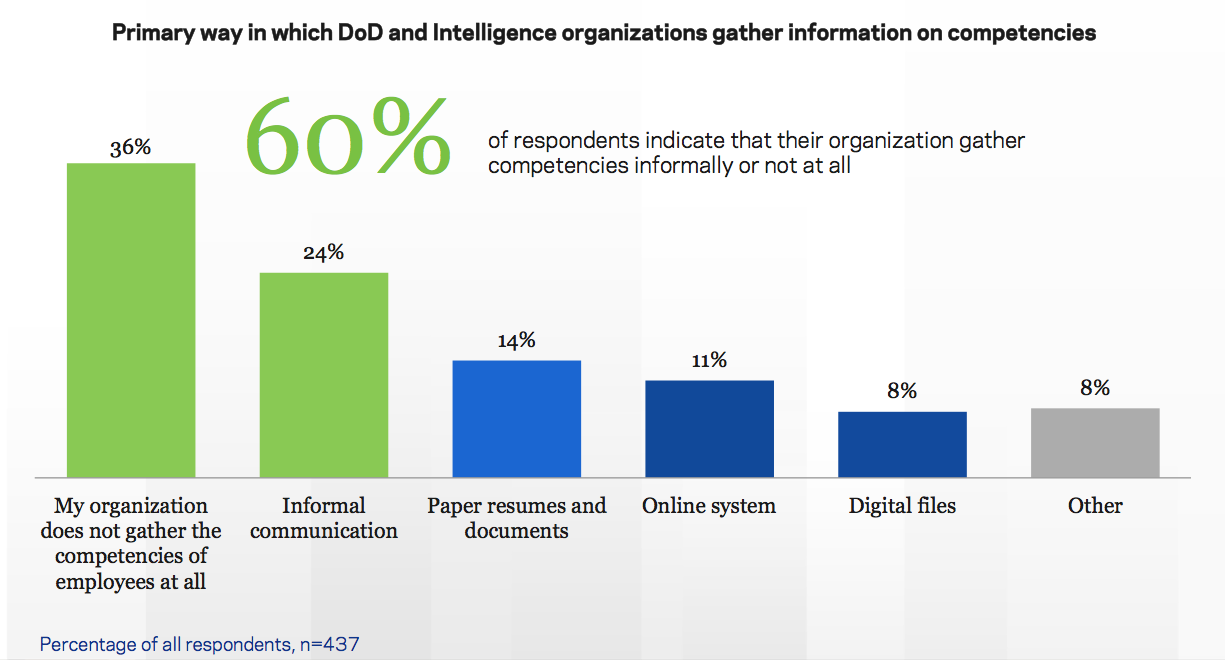 Information gaps like these may make it more difficult for DoD officials to justify potential personnel cuts or determine which employees have the skills necessary for mission-effectiveness. GBC’s survey respondents reiterate this point: of those who identify as supervisors of other employees, 82% agree that up-to-date information employee competencies would improve their ability to manage personnel, including staff reductions.

While personnel cuts may be unavoidable as the U.S. transitions out of large-scale Overseas Contingency Operations, better information on defense employees could help mitigate the consequences a reduced workforce. For instance, recording and leveraging the skills and experience levels of employees can help organizations redistribute their resources to meet new mission needs. It can also help the employees themselves; those with full knowledge and records of their competencies may be better prepared to acquire similar and well-suited positions elsewhere in the public or private sectors. And perhaps most importantly, DoD leaders can reduce the likelihood that a loss of employees will translate into a loss of human capital necessary for the department to carry out its mission.

* GBC deployed the survey to a sample of Government Executive, Nextgov, and Defense One online and print subscribers in March 2014, receiving responses from 1,121 federal leaders representing over 35 departments and agencies. This post focuses on the 438 respondents who identified as employees of the Department of Defense or intelligence organizations.