sponsor content
Developing the Future Government Workforce
Skip to Content
Get the latest on need-to-know topics for federal employees delivered to your inbox.
View Privacy Policy
Collaboration Can Boost Creativity, But Agencies Aren't Built For It Yet

Creativity is important for organizations trying to stay agile as they solve problems new and old. So how are agencies encouraging their employees to devise new solutions? Here’s the third post in our Innovation Series, where we’ll walk you through what we found.

Over the last couple of weeks, we’ve been discussing the results of our study on federal innovation. We previously discussed the importance of collecting data, monitoring effectiveness, and setting goals for new initiatives. But these aren’t always the most visible features of an agency’s culture. In one of our most interesting findings, respondents say that lack of leadership support, a risk-averse culture, and lack of institutional support are the things that most hinder innovation in their agency. These three management-related issues were even larger than lack of funding, an answer choice that usually tops our list of challenges: 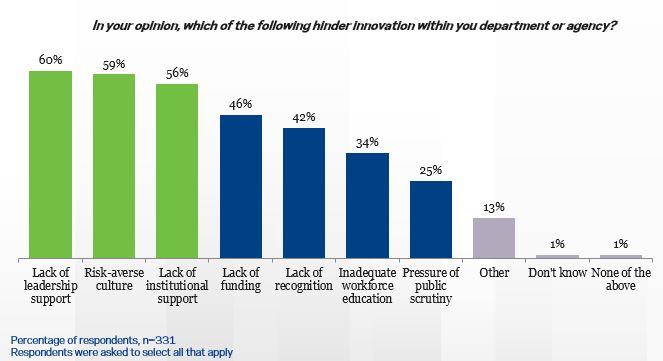 So what can agency leaders do to reverse the perception that they are the problem? The answer may be hiding in plain sight. We also asked respondents where they look for inspiration when working on new projects: The answer choice “my coworkers” was the most popular, followed by private sector companies and other departments and agencies. 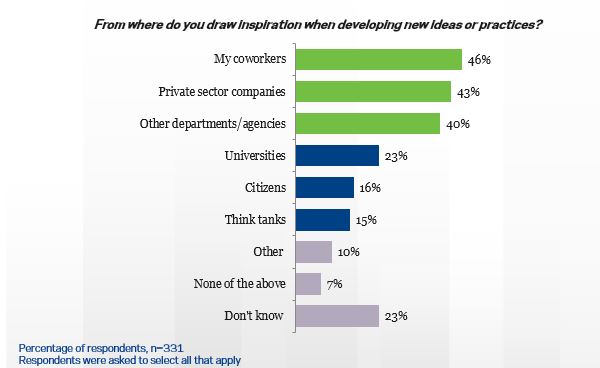 This suggests that resources abound for employees looking to innovate -- they need only look down the hall. But shared spaces have become a staple of modern office design, precisely because they remove all the barriers that might prevent innovation. When asked whether their office design facilitated innovation, 63% of respondents disagree or strongly disagree. We followed up by asking about digital collaboration tools that might bridge the gap, and found that only 20% gave their tools a positive rating. By performing additional data cuts, we were able to determine that people who rated their tools positively also thought their agency was more supportive of innovation -- indicating that making collaboration a priority could be a good place to start. 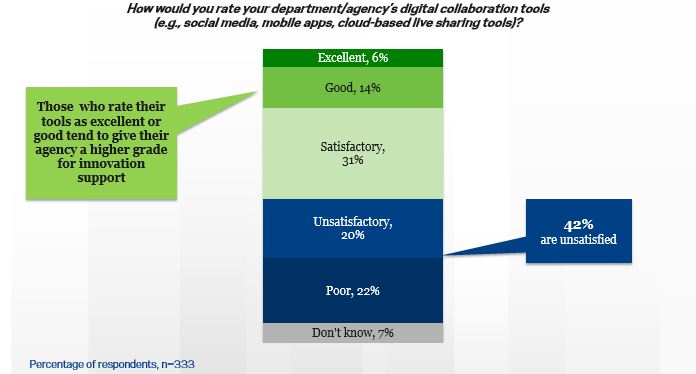 Methodology: GBC deployed a survey to a random sample of Government Executive, Nextgov, and Defense One online and print subscribers in August 2014. The pool of respondents includes those of GS-11 through Senior Executive Service levels in at least 30 different civilian and defense agencies. To see the rest of our findings, download the report here and stay tuned for more in our Innovation Series. If you missed them, check out the first and second posts.