See which agencies have shed the most workers under Trump.

President Trump came into office with a promise to slash the size of the federal workforce. As his presidency comes to a close, he has succeeded in that mission in all but three cabinet-level departments.

Growth in the departments of Defense, Homeland Security and Veterans Affairs has more than offset the losses elsewhere, meaning the federal workforce has actually experienced an overall uptick of 2% since Trump came into office. President-elect Biden, however, will have his work cut out for him in most corners of the government to fulfill his own promise to restore what he has called “hollowed out” federal agencies.

Shortly after taking office, Trump issued a hiring freeze and instructed every agency to develop short- and long-term plans to slash their rolls. Administration officials subsequently walked back that directive and most agencies said they had undertaken efforts to rebuild their workforces, but virtually all of them now have a smaller footprint than they did just before Trump took office. In fact, job losses at most agencies have only been exacerbated since the administration began publicly discussing its intention to step up hiring.

The incoming Biden administration has promised to boost agency workforces, both through new hiring and quickly finding ways to bring employees back who opted to leave under Trump.

“As a principle, rebuilding the institutions of government that have been hollowed by this administration, finding ways to engage with the civil servants the career officials show are frankly the heart and soul of government … those agencies wouldn't function without the thousands of people who have served for decades, is a priority for President-elect Biden and Vice President-elect Harris,” Jen Psaki, a transition advisor, said last week.

The transition team has placed an emphasis on that priority, several individuals directly and indirectly involved with the effort told Government Executive. Biden’s team has focused on the “decimation” of the federal workforce during the Trump years and is committed to finding ways to rebuild it, they said. A lot of experts with institutional knowledge fled federal service, the thinking went, and the incoming administration is looking at various hiring authorities to get them back in the door.

“There was a commitment to gaining an understanding of how the government operates, what tools and levers are available to a new administration to quickly leverage to make the kind of impact they really need to on these impact issues,” said a former Office of Personnel Management director who has consulted the transition team.

At the department level, the Biden team will have the steepest hole to climb out of at Education, which has seen a 15% decline in employees since late 2016. That is up from 11% about halfway through Trump’s term. Both State and Labor employ about 12% fewer workers than they did prior to Trump's presidency. State kept a hiring freeze in place for 16 months until Secretary Mike Pompeo ended it in 2018. While he and department officials said they had instituted plans to restore hiring, State has only seen its net reduction in civil service workers continue to grow. The State inspector general has said the hiring freeze’s impact was deep and widespread and would not be fully reversed until 2021, though the most up-to-date figures show the department is still trending in the wrong direction. 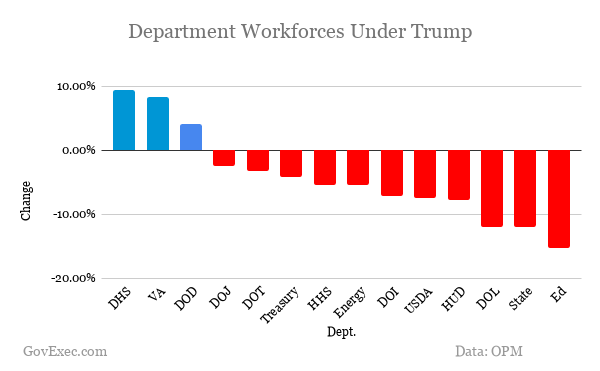 At Labor, a spokesperson said in early 2019 that workforce cuts were not part of a "targeted reduction," but instead the result of retirements that were part of "a normal business cycle.”

The department was “committed to protecting the health and safety of the American workforce and has directed agencies to hire the necessary staff to carry out that mission," the spokesperson said at the time. Still, Labor’s workforce cuts have continued, growing from a 9% reduction around Trump’s halfway point.

Similarly, HUD said in early 2019 it was not actively cutting jobs and would begin new policies to retain employees and increase its focus on hiring efforts.

“It’s important to note that we have not targeted a reduced staffing level and are doing everything we can to reverse the trend and bring our staffing level into alignment with the funding that’s been provided for staffing,” a spokesman said at the time. Instead, HUD’s workforce reduction has grown slightly.

Agencies have used various methods to shed employees. The Environmental Protection Agency and Interior Department initially offered separation incentives to workers, though Congress has since blocked those efforts. Other agencies have relied on attrition. Some took a novel approach, seeking to incentivize employees to leave by relocating their offices. When the Agriculture Department moved two of its components—the Economic Research Service and the National Institute of Food and Agriculture—from Washington to Kansas City, then Office of Management and Budget Director Mick Mulvaney said it was a “wonderful way” to get long-time career workers to quit.

Agriculture has seen a 7% workforce reduction under Trump, but at ERS and NIFA the attrition rates are 33% and 24%, respectively.

The Trump administration has prioritized hiring at Homeland Security, VA and Defense, where the civilian workforces have grown by 9%, 8% and 4%, respectively. The Commerce Department workforce had grown as of the most recent data, but that was attributable to a surge in temporary hires for the decennial census and had otherwise been trending downward.

At the 22 independent agencies with at least 1,000 employees, all but two—the Small Business Administration and the National Science Foundation—have shed employees under Trump. Aside from the Office of Personnel Management, which shifted many of its workers to Defense under a restructuring, the National Labor Relations Board and the Nuclear Regulatory Commission saw the biggest declines. 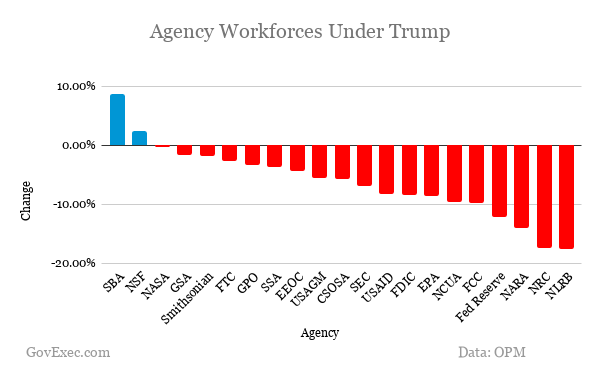 Miriam Cohen, the chief human capital officer at Nuclear Regulatory Commission, said in an interview with Government Executive last month the workforce cuts at NRC predate Trump and have been ongoing for eight or nine years.

“That's created a challenge because when you're not hiring and you're downsizing, it's hard to attract people to come to work for you,” Cohen said. “But now we want to really reach the new people that are graduating from colleges and universities and really build our pipeline again.”

Biden, meanwhile, has said he wants to reverse the trends Trump has created, saying the current president has a "fundamental misunderstanding" of how government works and his administration will depend on a fully functioning civil service.

“By hollowing out the ranks of federal agencies and using employees as scapegoats for problems in the government, this administration has demonstrated a level of cynicism that undermines who we are as a people and what we strive to accomplish," Biden said earlier this year. “A strong, healthy, supported federal workforce is essential to the success of any administration, and as president, I will not be able to do my job without them."

Courtney Bublé contributed to this report.