Concerns about the demographic composition of the workforce are longstanding, GAO said.

A watchdog reported on Tuesday that although the State Department says it is committed to improving racial and gender representation in its workforce, department leaders have failed to analyze career promotion data to adequately understand barriers women and minorities face.

The Government Accountability Office analyzed data for over 40,000 employees who worked at the department from 2002 to 2018 and found “uneven progress” in improving diversity. The total proportion of racial and ethnic minorities in full-time, permanent positions increased from 28% in fiscal 2002 to 32% in fiscal 2018 with variations among specific races and ethnicities. Over the same period, the number of women at the agency decreased slightly from 44% in 2002 to 43% in 2018. Additionally, with few exceptions, whites and men had the highest promotion rates and held the majority of leadership positions among the career service and foreign service.

“According to State, to represent the United States to the world, the agency must have a workforce that reflects the rich composition of its citizenry. State has implemented several plans, activities, and initiatives to improve diversity and representation throughout the ranks of its workforce,” the report said. “However, longstanding diversity issues persist at the agency, such as underrepresentation of racial or ethnic minorities and women in the senior ranks” and it “may have an incomplete picture of issues affecting diversity in its workforce” with its current annual reporting.

Among the auditors’ findings on racial and ethnic diversity: 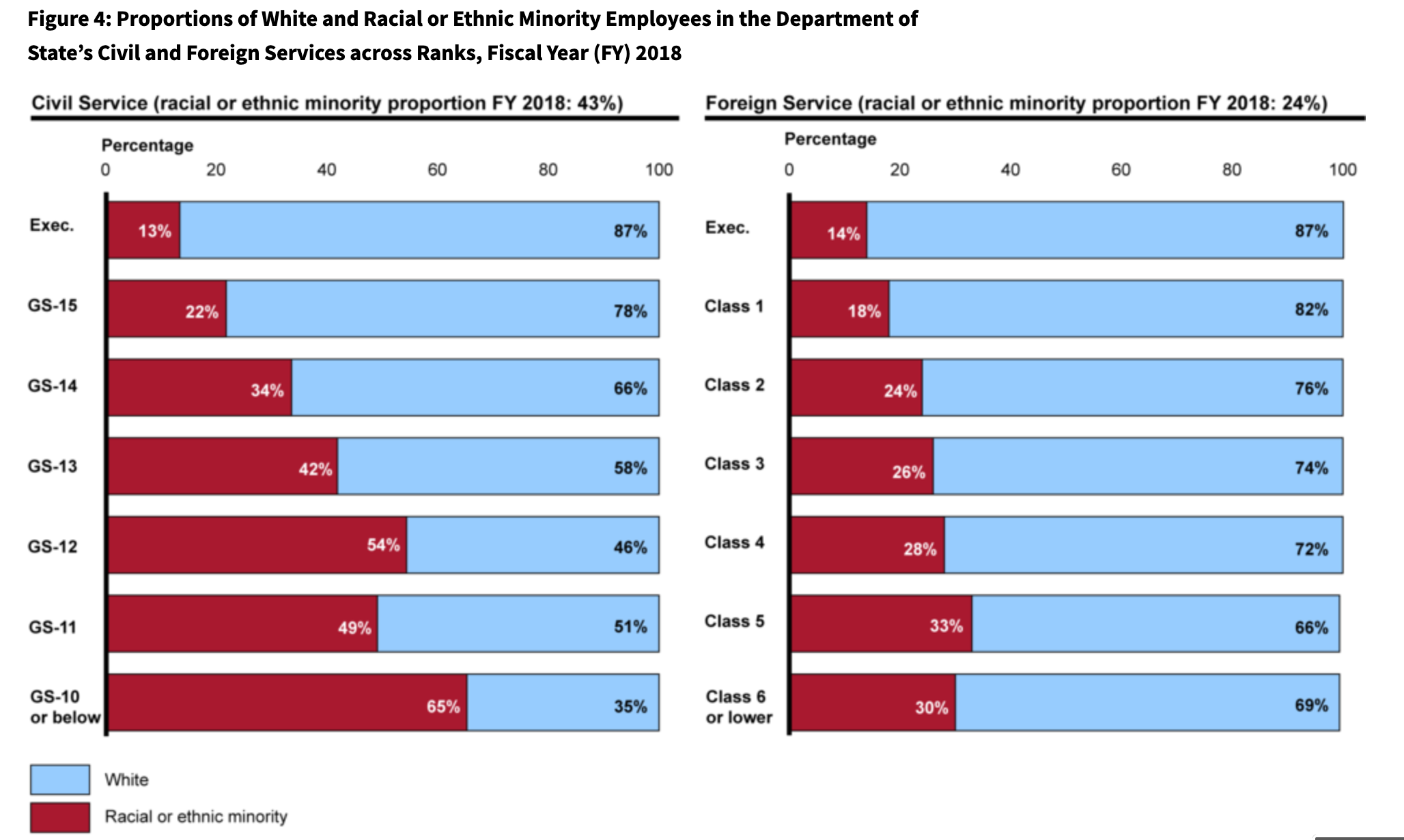 As for gender, the results were a little more nuanced: 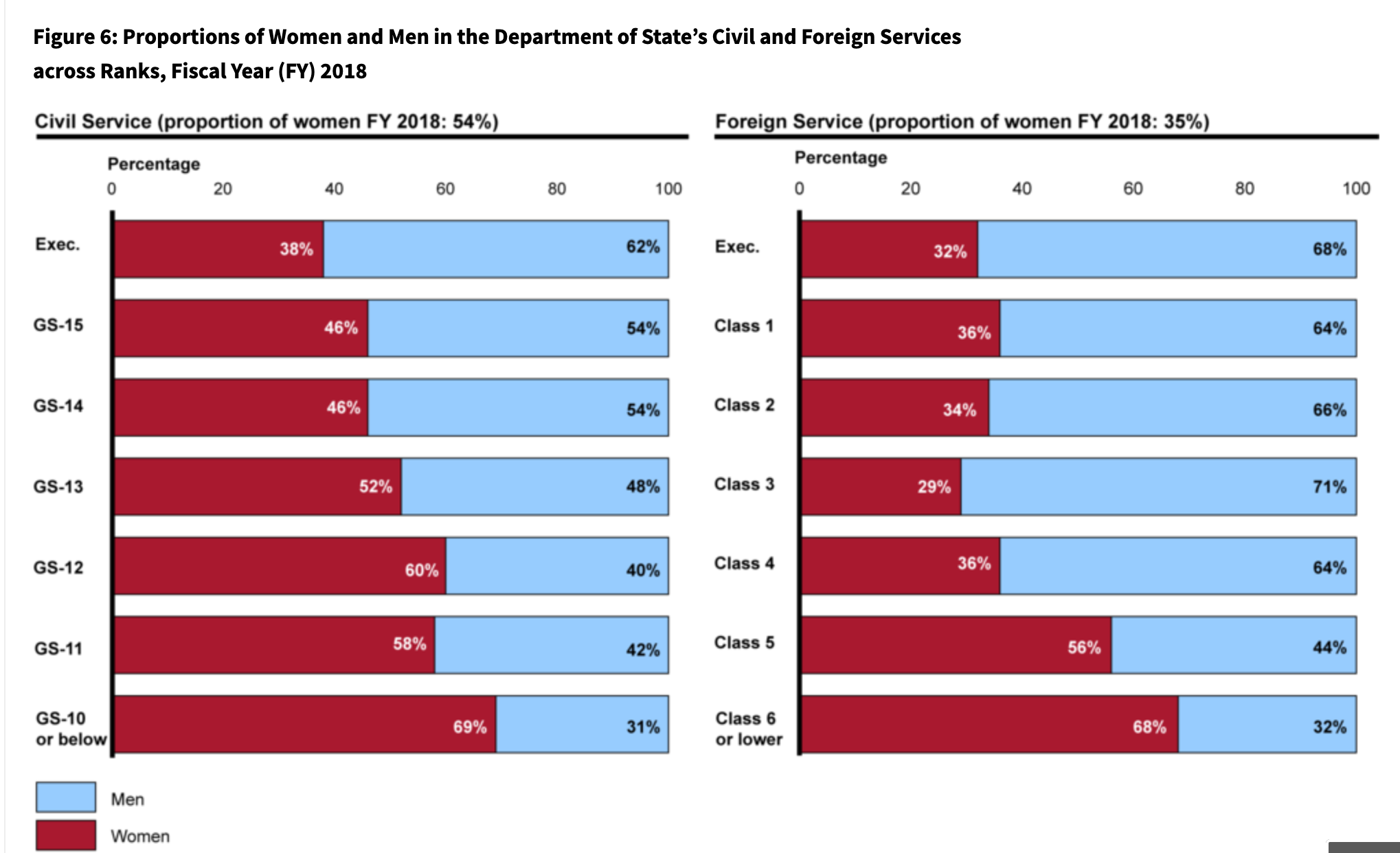 State as far back as the 1980s has implemented various initiatives to address the lack of diversity, which is also prevalent in the intelligence community, Federal Bureau of Investigations and Homeland Security Department, among other federal agencies. The department’s efforts include developing an annual diversity report, human resources guidance, fellowships and outreach initiatives, mentorship and skills-building programs for employees, among other things.

However, GAO said the department’s annual reports “have focused only on the underrepresentation of women, including racial or ethnic minority women, in the senior ranks” not other career levels. GAO said State should further study workforce data and employees’ feedback to get a better understanding of where the diversity gaps are, a recommendation State agreed with.

“We don’t have an answer [as] to why,” there were improvements in some areas and not others, “but I think that’s exactly the kind of thing we’re encouraging the State Department, through the recommendation, to kind of get behind,” said Jason Bair, GAO’s director of international affairs and trade who led the study. “If you’re doing better [or well] in some areas and worse in others you should understand and explore, what lessons you might learn.”

At an event on Tuesday to discuss the report’s findings, Sen. Bob Menendez, D-N.J., the ranking member of the Senate Foreign Relations Committee, said he will introduce a bill this week to encourage State “to develop new recruitment, retention and promotion strategies and mechanisms to grow and maintain a more diverse workforce.” In addition to addressing race, ethnicity and gender issues, the bill would require State to also consider the LGBTQ+ community.

Other speakers at the event included former foreign services officers. “Since I joined the foreign service in 1985 I have heard Secretaries of State, directors general and recruiting officers respond to questions about the lack of diversity in the Department of State with the same sentence: we are not where we should be, but we’re making progress,” said Ambassador Gina Abercrombie-Winstanley, a 32-year diplomat who left the department in 2017. “Today even that bromide is clearly not true. This report makes clear we have not made progress.”

NEXT STORY: White House Confirms It's Purging Disloyal Employees 'From the Bowels of the Federal Government'