Management
Why Trump's Budget Cuts Are Even More Severe Than Advertised

By one measure, Trump’s proposals represent a 25 percent reduction to domestic agencies.

This week, the Trump administration will roll out its plan to cut $54 billion from domestic federal agencies in fiscal 2018.

The figure represents a reduction from spending levels under the current continuing resolution and within the framework of the most recent budget deal reached in 2015. When examining the cuts in a broader context, however, the scaling back of funding for federal agencies is much more severe.

The 2011 Budget Control Act instituted strict spending caps for both defense and non-defense agencies. In fiscal years 2014 through 2017, lawmakers agreed to raise those caps via two different budget agreements. In fiscal 2018, Congress has reached no such deal, so the original caps are set to be reinstated. That means, statutorily, domestic agencies would see their cumulative topline funding reduced by $3 billion in the next fiscal year, from about $519 billion to $516 billion.

Trump’s budget presumably will propose taking that figure down by an additional $54 billion, from $516 billion to $462 billion. That represents about an 11 percent cut to non-defense discretionary spending. That figure only tells part of the story, however.

In the original assumptions under the Budget Control Act, domestic agencies were slated to receive $553 billion in fiscal 2018. Those figures assumed spending would continue to rise with inflation. Under that assessment, Trump’s plan would cut non-defense spending by $93 billion, or 16 percent. According to the Center for Budget and Policy Priorities, domestic agencies would endure a 25 percent cut below the 2010 spending level when adjusting for inflation. That figure is even larger, the think tank said, when considering likely increases for the departments of Veterans Affairs and Homeland Security. 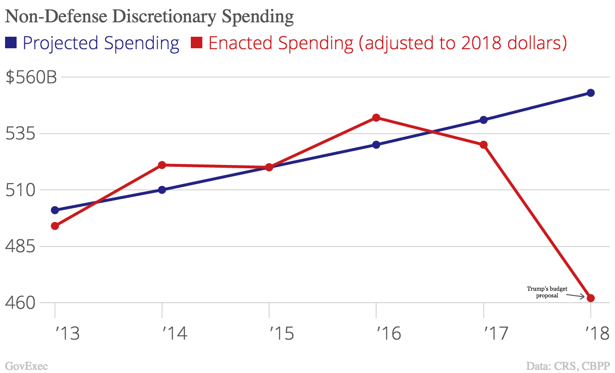 “This part of the budget has really already been dramatically reduced from the size of the economy and the component of the overall budget,” said Shai Akabas, director of fiscal policy for the Bipartisan Policy Center. CBPP agreed, finding non-defense spending as a share of the Gross Domestic Product would hit a record low under Trump’s plan.

Federal agencies and the Office of Management and Budget have spent the last few weeks working through the “passback” process, during which the two sides have discussed what their topline funding would be and how they would absorb any cuts. Those discussions have illuminated series of programs and offices the administration is considering cutting or eliminating.

“What we’re seeing is when you commit to significantly [cut from] an already diminished level, you’re going to have to make some really significant decisions,” Akabas said.

Democrats are likely to unanimously oppose Trump’s proposal to increase defense spending while decreasing funding for domestic agencies. This is significant because adjustments to the 2011 BCA -- as the president is proposing -- would require 60 votes. Even some Republicans have called parts of the administration’s reported targets for cuts “dead on arrival” and said they are “not going to happen."

“The extreme cuts reportedly planned by the Trump administration are encountering widespread opposition,” said CBPP’s David Reich and Chloe Cho. Even without Trump’s cuts, “just leaving the full sequestration cuts in place in 2018 would create real problems for the federal government’s ability to provide needed services and investments.” To avoid that fate, the researchers suggested Congress once again find alternative savings to increase both defense and non-defense spending.

Trump will unveil his “skinny” budget on Thursday, giving lawmakers an opportunity to formally weigh in on his proposals. In the more immediate term, they must determine how to allocate funds for the remainder of fiscal 2017 by April 28.