Management
Federal Employees and Retirees Owed $3.31B in Back Taxes at the End of Fiscal 2013

Total debts were down from the previous year, but the number of delinquent feds jumped.

Federal employees and retirees owed Uncle Sam $3.31 billion in back taxes at the end of fiscal 2013, a 2.2 percent decrease from fiscal 2012.

The number of tax delinquent feds and retirees -- which does not include employees who have set up payment plans with the federal government -- actually increased by about 2.6 percent to more than 318,000. The Internal Revenue Service calculates the figures annually as part of its Federal Employee/Retiree Delinquency Initiative.

About 116,000 current civilian federal employees were delinquent on their taxes at the end of last year, a 3.2 percent increase from fiscal 2012. The feds owed just more than $1 billion. The number of civilian retirees who owed back taxes increased by nearly 8 percent to 52,493. That group maintained a debt of about $557 million.

Active-duty military personnel held a low delinquency rate of just 1.7 percent. Employees at the Housing and Urban Development Department had the highest delinquency rate of any major executive branch agency, at 5.29 percent. The Veterans Affairs, Health and Human Services, and Education departments were the only other major agencies where more than 4 percent of the workforce owed back taxes. 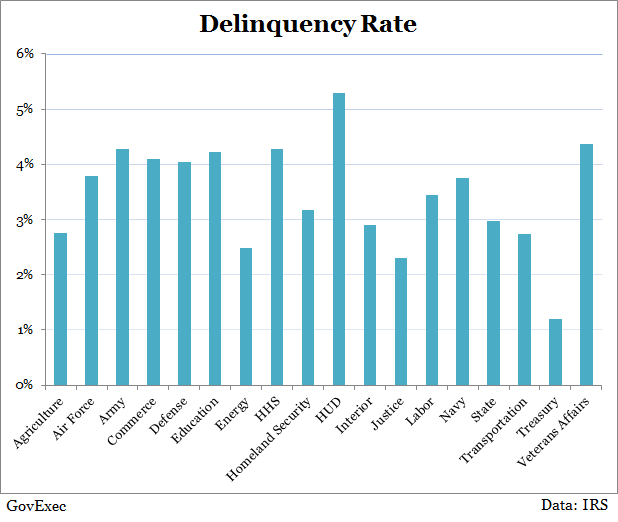 Generally, federal employees and retirees paid their taxes on time at a higher rate than the public at large; overall, 8.7 percent of Americans are tax delinquent.

A Senate panel this week advanced a bill to prohibit tax delinquent individuals from working for the federal government. The bill would both remove from federal service current employees with tax debts and ban agencies from hiring new workers who owe back taxes.

A recent report from the Treasury Inspector General for Tax Administration found the IRS gave $1.1 million in bonuses to employees who did not pay or underreported their taxes. The Treasury Department, which includes the IRS, employed a lower percentage of tax-delinquent workers than any federal agency.

NEXT STORY: The CHCOs Game of ‘Survivor’ and How to Win