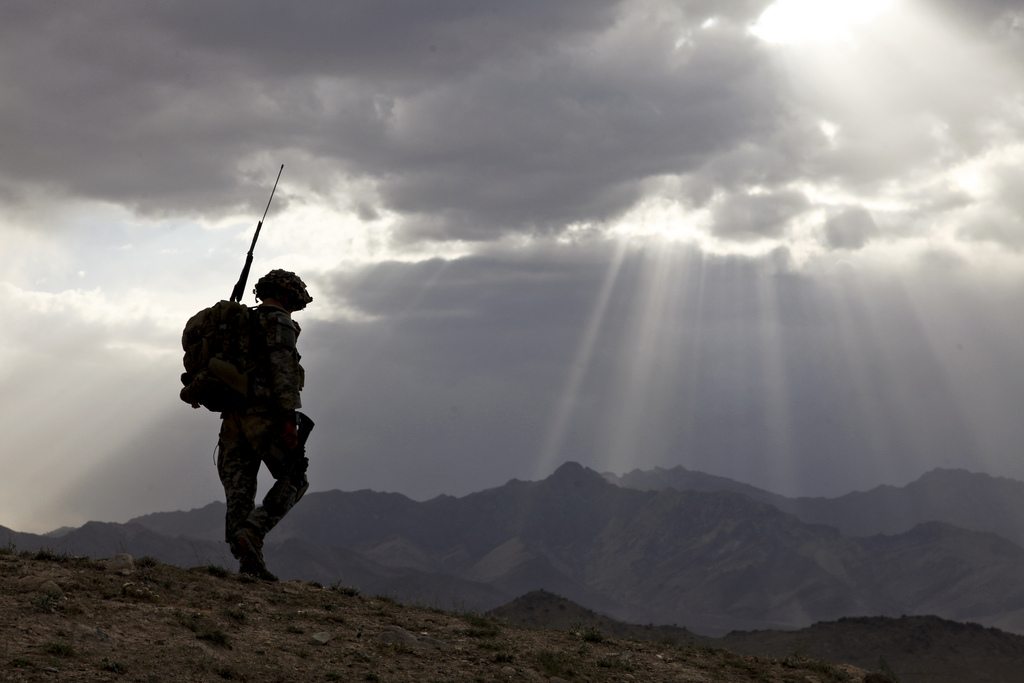 For the U.S. Army

Corps of Engineers (USACE), the ability to establish secure and robust lines of communication in Afghanistan could often mean the difference between life and death for U.S Army battalions on the front lines of the war against the Taliban. Embedded in Afghanistan’s South District, the scene of some the heaviest fighting throughout the now-thirteen year long conflict, USACE South District’s information technology section (J6) was responsible for setting up everything from satellite communications to web services to teleconferencing.

J6 played a game-changing role in 2011, installing an experimental wireless network to link U.S. government computers throughout the district. J6's wireless network connected the headquarters in Kandahar to fourteen forward-deployed infantry commands. This enabled seamless communications between HQ and field-deployed assets. The value of real-time communications on the battlefield cannot be overstated, according to USACE South District chief technology officer, Chris Brooks, "Going wireless is definitely a force multiplier."

Throughout their tenure in southern Afghanistan, Army engineers were in constant need of new supplies and expertise. Often, something as simple as dust in the air would damage sensitive equipment and require specialized replacement parts and labor from thousands of miles away. To meet the rugged demands of battlefield IT, USACE needed the ability to procure IT services quickly and conveniently. What they needed was a contract vehicle with a truly global reach.

As perhaps the largest and most complex organization in the world, the Department of Defense spends over $35 billion annually to maintain and modernize its information systems, which is perhaps the most dynamic and risky sector in federal contract management.

To address the many challenges associated with its contracting process, over the last decade DoD has pioneered the development and use of multiple award contracts (MACs) that feature provisions to reduce administrative fees, strengthen security protocols, decentralize procurement authority, and incentivize performance. These contracts have received an increased amount of attention in recent years, with 64 percent of federal managers GBC surveyed indicating that their agency would likely look to interagency contract vehicles operated outside of GSA over the next twelve months.

One such MAC, Information Technology Enterprise Solutions-2 Services (ITES-2S) has since 2005 delivered federal leaders the services they need to provide value for American taxpayers, and U.S. war fighters the capabilities they depend on to meet their missions on the ground. Featuring a number of innovative provisions to make procurement more convenient -- including decentralized ordering through an online portal, no administrative fees, and flexible pricing for task orders -- ITES-2S has proven an efficient and effective vehicle able to meet the challenges of today’s demanding contracting environment.

Department of Defense total IT spending

The information technology market is evolving so quickly that federal agencies must constantly modernize their enterprise infrastructure or risk falling behind. According to a 2009 report by the Defense Science Board, the dynamic nature of the IT market necessitates a unique acquisitions process “designed to accommodate the rapid evolution of information technologies; their increasingly critical position in DoD warfare systems, warfare support systems, and business systems; and the ever-evolving and often urgent needs of our war fighters.”

There is a need for a unique acquisition process for information technology Defense Science Board, 2009

The federal workforce needs access to the same cutting edge technologies that drive global e-commerce – like cloud computing, big data analytics, and mobile technology – in order to deliver high-quality public services to increasingly digital citizens. And to achieve this goal, federal agencies rely to a large extent on private contractors to supply the crucial technical know-how.

The GBC study found that within the next twelve months, 55 percent of federal officials say their agency will look to service contractors for systems operations, maintenance, and tech support. Similarly, half of respondents say their agencies will procure IT services related to cloud computing, data management, and application development, while 41 percent will seek outside consulting services like strategic assessments and enterprise IT planning.

Despite the need to acquire IT goods and services at a rapid pace, federal agencies are finding their balance sheets stretched increasingly thin following multiple fiscal crises and sequestration. Given the current degree of budget uncertainty, many may be reluctant to allocate scarce resources toward large-scale, capital-intensive projects. Instead, government leaders are embracing the concept of “IT-as-a-service.” Doing so provides federal agencies opportunities to leverage existing private sector infrastructure to acquire mission-critical capabilities at a lower price point, as well as the flexibility to shift IT to an operations expenditure. According to GBC, 59 percent of federal managers have shifted from acquiring certain IT capabilities as hardware assets, to procuring those functionalities as services.

ITES-2S was originally crafted by the U.S. Army to address several contract management challenges. Until the mid-2000’s, defense agencies had largely relied on contract vehicles supported by the General Service Administration, which were often subject to delays and typically carried a two percent administrative fee throughout the life of the contract. In addition, GSA contracts often lacked the security parameters required for each DoD task order.

Having successfully released ITES-1, which standardized security parameters for all Army IT service contracts, the Army launched ITES-2S in September 2005 with the goal of raising its contract ceiling to $20 billion over eight years.

ITES-2S reflects the Defense Department’s preference for shifting towards large indefinite duration, indefinite quantity (IDIQ) contracts and strategic sourcing, with its high ceiling giving federal and defense agencies the room they need to pursue IT service-driven modernization. According to Deltek, ITES-2S has been one of the more highly utilized contracts within DoD since its introduction, with 1130 task orders awarded at a value of over $8.6 billion. In 2013, ITES-2S was the Army’s fifth most heavily utilized contract -- behind only LOGCAP IV, BCST, S3, and ANSWER -- with almost $1.5 billion in obligations.

In addition to zero administrative fees and strong security protocols, ITES-2S was designed with several features that make it an attractive option for defense and civilian procurement managers.

One reason ITES-2S stands apart is its flexibility. Procurement officers across the federal government can take advantage of decentralized ordering procedures to place task orders without the requirement of submitting a Military Interdepartmental Purchase Request (MIPR). Potential users have at their fingertips a comprehensive list of IT services to choose from as part the Army’s Computer Hardware Enterprise Software and Solutions (CHESS) program. Services are grouped into seven major categories:

A second advantage of ITES-2S is that it allows personnel to leverage economies of scale to acquire services more cheaply and conveniently. Using the CHESS online portal, federal employees can participate in “consolidated buys,” consisting of six- to eight-week windows during which time any procurement officer can add requests to a volume task order. This enables business units both large and small to take advantage of volume pricing -- essential for success in large-scale modernization operations.

In addition, contract decisions on ITES-2S are final. Procurement offices have the freedom to make sound judgments in favor of vendors offering the best value without having to worry about being second-guessed. GAO reports that the number of bid protests has risen 83 percent since 2006, largely as a result of more intense competition over a limited number of contracts. GBC found that 55 percent of federal executives believe that their agencies have faced greater numbers of bid protests over the past year. Among respondents most likely to be involved in the IT procurement process, that number rises to 63 percent.

Although the right to protest contract awards can serve as a check and balance on the system, abuse of that right can result in unnecessary delays in delivering crucial IT capabilities to the federal workforce or soldiers deployed overseas. Federal leaders agree: 60 percent believe that that the cost of bid protests, in terms of delays and resources expended litigating them, outweighed the need for greater accountability. ITES-2S’s non-protestable awards enable efficient turnaround -- often within sixty days or less.

Although an Army-managed contract, any defense or civilian agency interested in procuring IT services has authority to use ITES-2S. While available to all agencies, over 70 percent of ITES-2S task orders remain contracted through the Army and 97 percent through DoD as a whole. By taking advantage of the opportunities afforded through ITES-2S, any federal procurement official -- be they from the Bureau of Land Management, Drug Enforcement Administration, or National Institutes of Standards and Technology -- can acquire IT services with the same speed and flexibility as U.S. forces stationed around the globe.

By taking advantage of ITES-2S, any federal procurement official can acquire IT services with the same speed and flexibility as U.S. forces stationed around the globe

Between now and the end of 2014, the U.S. Army is expected to announce a long-awaited recompete for ITES-2S, likely to take the form of Information Technology Enterprise Solutions 3 Services, or ITES-3S. According to preliminary reports, ITES-3S will retain a similar structure as ITES-2S and support roughly $11-15 billion in IT services spending over the next five years. Like ITES-2S, ITES-3S will operate through the Army's CHESS program and offer federal procurement officers many of the same popular and convenient features, including decentralized ordering, no administrative fees, and non-protestable awards.

Government Business Council, the research arm of Government Executive Media Group, released a survey in June 2014 to a random sample of Government Executive, Nextgov, and Defense One print and online subscribers. Over 355 federal employees with stated purchasing authority participated in the survey. Representatives included those at the GS/GM 11-15 grade levels and members of the Senior Executive Service in defense and civilian agencies. Of these individuals, 37% report authority of $5 million or more.