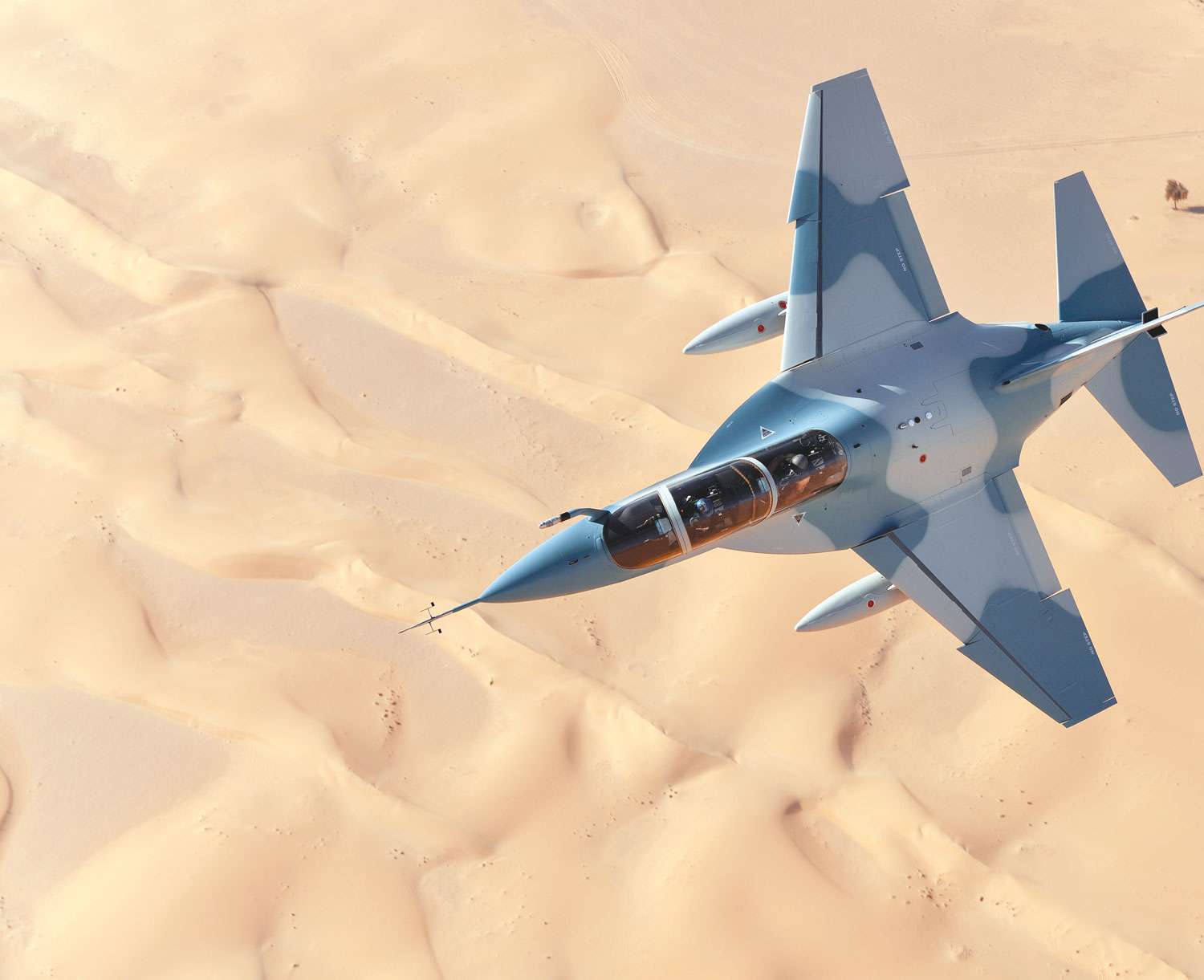 To most of the thousands of people streaming into the massive convention center on the Thames in London in September, the sleek cruise missiles on the walkway were just two more weapons on offer at the Defense and Security Equipment International exhibition, one of the world’s largest arms shows. Made by Kongsberg, a Norwegian defense firm founded when the U.S. and Britain were fighting the War of 1812, they nonetheless sported bright-red Raytheon logos on their glossy white paint, hinting at a far more modern battle: Kongsberg’s marketing campaign to win sales to the Pentagon.

The opening years of the 21st century sent American military spending skyward even as defense spending slumped elsewhere and international arms makers have rushed to establish a foothold in the U.S. market. Now, as Pentagon spending flattens out, those firms are seeking to solidify their market share. Most are focused on selling products not currently made by U.S. companies, while others are touting commercial—and cheaper—gear adapted for the military.

Kongsberg and others have found success in filling niches, whether in Pentagon sales, as subcontractors to American prime contractors, or even as suppliers to other subcontractors, says Andrew Hunter, who runs the Defense-Industrial Initiatives Group at the Center for Strategic and International Studies.

Hunter, who once led the Pentagon’s Joint Rapid Acquisition Cell, points to Kongsberg’s stabilized gun mounts, optical systems, and over-the-horizon communications gear. Developed for Norway’s rugged terrain, much of the equipment has proved useful in the mountains of Afghanistan.

“They don’t try to be the best at everything. They focus on some of these niche areas where they can be world-class,” Hunter says. “Then they can come into the U.S. market as a sub-tier supplier—rarely, if ever, as the prime—and it’s been a pretty successful model.”

You can put that U.S. face on whatever it is you are doing. It has political benefits. It also has compliance benefits.

For example, Saab and Airbus build radars for the Navy’s two littoral combat ships, one built by a General Dynamics-Austal team and the other by Lockheed Martin.

“If you have a superior solution that will help them finish their mission, then you have an opportunity,” says Michael Sheehan, president and CEO of Thales Defense & Security, the U.S. arm of the French defense giant Thales. Sheehan spent 20 years working for British behemoth BAE Systems and other defense firms including DRS Technologies and Cobham.

“The fact that it comes from a different nation is not the issue,” he says. “The major issue is what are its capabilities and does it meet the requirements.”

Thales has sold to the Pentagon sonar systems, helmet-mounted displays, and combat management systems—areas where the company has invested money in proving equipment and technology for European forces.

“In all three of those instances, the U.S. has readily embraced the fact that someone else paid for it and it applies and meets a critical need,” Sheehan says.

Most foreign firms looking to break into the U.S. market seek out an American company to help pitch foreign-made arms—and often to help make them in the United States. Kongsberg has walked a convoluted path in search of a partner for its Joint Strike Missile and Naval Strike Missile, stealthy—low-flying weapons built to sink ships.

The Joint Strike Missile is made for the Lockheed Martin F-35 Joint Strike Fighter, which Norway will buy and equip with the missile to defend its coast. The Kongsberg missiles are among the few weapons in their class that will fit inside the F-35’s bomb bay.

Kongsberg originally forged an arrangement with Lockheed Martin’s missile division, but now Lockheed is building its own anti-ship missile. So last year, Kongsberg teamed up with Raytheon to pitch the Joint Strike Missile. The company tightened the bond earlier this year, announcing plans to co-pitch the Naval Strike Missile as well.

“You can put that U.S. face on whatever it is you are doing,” Hunter says of partnering. “It has political benefits. It also has compliance benefits because as the process can be fairly complex, when you partner with someone, you’re dealing with someone who knows how to work that process.”

Alenia, an Italian firm, plans to market its
M-346 jet trainer
to the U.S. Air Force.

It is difficult for foreign firms to go head to head with U.S. manufacturers for Pentagon contracts. U.S. defense leaders say they welcome overseas bidders to enhance competition because the much-consolidated U.S. defense industry often cannot muster more than two or three bids to compete for big programs. But many defense contracts are kept out of foreign reach by Congress, American companies, and even the military itself. So defense executives and experts say the best way foreign firms can get Pentagon contracts is to figure out what U.S. companies are not providing—particularly specialized equipment that is urgently needed on the battlefield.

That’s what Sweden’s Saab has done with its Carl Gustaf shoulder-launched anti-tank rockets, which last year became a U.S. Army “program of record” funded by the Pentagon budget. “There are many competitors, but we fill a gap that . . . exists in the U.S. and we have very capable products,” says Gorgen Johansson, who runs Saab’s Dynamics business.

Saab’s path to Pentagon sales began in the 1980s, when it first formed a relationship with U.S. Special Operations Command, Johansson noted at the London exhibition in September. SOCOM’s purchases have “been the key for us,” he said.

But even the special operators’ imprimatur doesn’t ensure success in getting the much larger contracts awarded by the service branches. Now Saab must “prove itself within the Army,” Johansson says. “It’s not easy to get in because it takes such a long time.”

Demonstrated success on the battlefield helps. U.S. soldiers have used the Carl Gustaf to hit targets in Afghanistan from more than 800 meters away, he says.

European firms tend to spend more of their own money on research and development than U.S. firms, which experts say could eventually give them a leg up. The Pentagon has been pushing American firms to invest more in research so they are better positioned for future military projects.

“The trick is to find those nuggets of technology that have real discriminators and application to the U.S. forces,” Sheehan says.

Thales and other firms chasing the market for intelligence-gathering and shipboard equipment are banking on sensors as an area where they can stand out. Thales, for example, developed the I-Master, a modular synthetic-aperture radar intended to fit on any aircraft or drone that carries an infrared camera. Flight tests are still going on, but the company is already pitching the radar to the U.S. military.

As for Saab, it tailors its research and development investments, at least in part, to the Pentagon’s needs. U.S. feedback led the company to lighten the latest version of the Carl Gustaf by 30 percent, Johansson says.

Meanwhile, even some international governments are starting to encourage their companies to shape their products to U.S. needs.

“In the past, we at [the Ministry of Defense] have contracted for highly bespoke products at great expense,” British Defense Secretary Michael Fallon said at the London exposition. “But we’ve then found that such high specifications have proved a hard sell in the international marketplace. Only later, perhaps too late, have we considered how such capabilities could meet the requirements of other potential customers.”

Getting the Big One

BAE Systems has become a major Pentagon supplier, largely by acquiring American firms. Italy’s Finmeccanica, parent of Alenia Aermacchi, AgustaWestland and other aerospace companies, had a similar strategy in mind when it purchased DRS Technologies, based in Arlington, Virginia. But the Italian arms of the company have struggled to get U.S. contracts for its European-made products.

Locking in multibillion-dollar deals has not been easy for foreign firms. The Italian aircraft maker Alenia thought it had a toehold in the U.S. market in 2007, when it partnered with New York-based L-3 Communications to build a small cargo plane for the Army and Air Force. No U.S. company had built an aircraft of the size wanted by Pentagon leaders. The C-27J beat out the Airbus CN-295, offered in conjunction with Raytheon. But after constant squabbling between the Army and Air Force for control of the program, the Army dropped out and the Air Force canceled it after buying just 21 planes.

Airbus and AgustaWestland executives have long believed their helicopters are a good fit for the U.S. military. AgustaWestland lost tortuous bids for contracts, and the company has since shied away from trying again.

Airbus teamed up with Northrop Grumman to bid on the Air Force’s $30 billion-plus aerial tanker program. But when rival Boeing protested, the Air Force relaunched the project, and Northrop then dropped out, saying the parameters for the competition favored Boeing, the eventual winner.

As for AgustaWestland, it worked with Lockheed to win a $10 billion-plus contract to build a new presidential helicopter, but that program foundered after late changes by the Pentagon and the Secret Service sent the price tag skyrocketing. The program was rebid, and the sole entry came from U.S.-based Sikorsky, who partnered with Lockheed.

The fact that it comes from a different nation is not the issue. The major issue is what are its capabilities and does it meet the requirements.

Agusta Westland and Airbus passed on the chance to compete to build a new Air Force search-and-rescue helicopter because they said the rules favored Sikorsky, which won the deal last year as the sole bidder.

Still, both European companies are pressing the Air Force and Navy to consider their helicopters to replace old security and training aircraft in the future. And Airbus won a $3 billion contract to sell the Lakota utility helicopter to the Army, a deal that is being expanded to include training helicopters made at a factory the company built for the project in Mississippi. “There are other programs in [the Defense Department] we believe the Lakota is well-suited for,” says Guy Hicks, senior vice president of government relations for Airbus’ North America operations.

Beyond the Pentagon, the company is eyeing homeland security and law enforcement agencies. “We think there are opportunities across the broad base of federal aviation programs as it relates to helicopters,” Hicks says. The Lakota is based on a commercial helicopter, which Airbus hopes will lead to sales in other areas. “I think space creates one of the opportunities to see some bleed-over between commercial and military for some of the products we have,” Hicks says. “We evaluate requirements, we bring the best and we produce it here . . . That’s very much been our model and would continue to be so.”

But the big contracts often take time—lots of time—to finalize. One Air Force effort to replace its 1970s-era Huey utility helicopters has been an on-again, off-again project for a decade.

Meanwhile, Alenia plans to offer its M-346 jet trainer for an Air Force project to buy about 350 new planes to replace the T-38, a plane that has been in the inventory since the 1960s. The company had teamed with U.S.-based General Dynamics, but the companies parted ways earlier this year, leaving Alenia in search of a new U.S. partner.

All of these firms pitch their wares at U.S. trade shows, but their presence remains minimal. In the London exhibit hall, where one display pavilion overshadowed the next, many dwarfing those of American firms, it was clear that the bulk of their business remains on the other side of the pond.

Marcus Weisgerber is the global business reporter for Defense One, where he writes about the intersection of business and national security. He has been covering defense and national security issues for nearly a decade, previously as Pentagon correspondent for Defense News and chief editor of Inside the Air Force. He has reported from Afghanistan, the Middle East, Europe, and Asia, and often travels with the defense secretary and other senior military officials.