Defense
Defense Could Do More to Curb Errors in Travel Payments, Watchdog Finds

Department is not doing a good job of tracking progress on its plan to reduce mistakes, GAO said.

The Defense Department could do a better job of cutting down on improper travel payments, a congressional watchdog found.

The department spent $18.3 billion on travel payments from 2016-2018, while incurring $965.5 million in improper payments. In October 2016, Defense published a remediation plan to reduce errors; however, “Its approach may not manage risk sufficiently, many actions remain incomplete and communication of requirements was lacking,” the Governmental Accountability Office said in a report released Thursday.

Military and civilian employees use the Defense Department’s travel pay program for trips to training sessions, site visits, relocations, special missions and more. The watchdog found that improper payments were a result of duplicate paid vouchers, incorrect mileage and lodging expenses, and expenses that did not match receipts. Defense’s plan to fix this long-term issue established requirements for 10 components aimed at cutting down on errors, and created a committee to monitor compliance with the requirements. 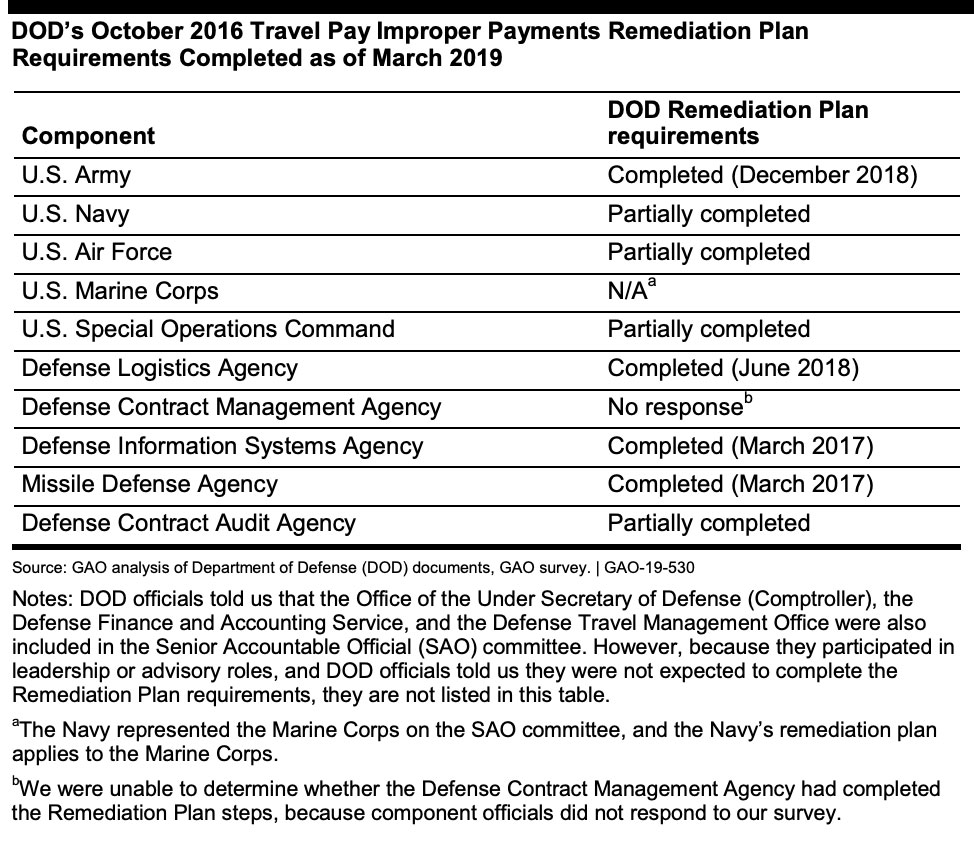 “DoD’s approach to monitoring specific components’ implementation of the Remediation Plan was based solely on the amount of [Defense Travel System] travel payments,” the watchdog reported. “DoD lacks assurance that the components it selected for greater scrutiny were the ones most at risk for improper travel payments.”

Auditors also found that the department does not have specific milestones to track the progress of most of the actions. “By establishing milestones, monitoring progress, and holding component leadership accountable for the implementation of the requirements of the Remediation Plan, DoD would have greater assurance that it has taken sufficient actions to reduce improper travel payments,” the report stated.

GAO conducted the audit from April 2018-April 2019 by reviewing data on travel payments and documents on the remediation plan, conducting a survey and meeting with department officials, and comparing Defense’s policies to Office of Management and Budget guidance on travel payment.

Other issues uncovered were lack of communication and knowledge of root causes of errors. Many of the inter-departmental offices and agencies were not aware of the remediation plan or were only slightly knowledgeable on its requirements. In terms of root cases, department officials have not figured out specifics, such as “why travelers were not uploading receipts for lodging expenses or why officials were approving vouchers without receipts.” GAO found the components (for example, the military branches) have different understandings of what constitutes as a “root cause” and their individual plans for addressing the causes “varied in terms of their sophistication.”

As a result of the audit, the watchdog recommended that Defense: revise the approach to selecting components for greater scrutiny, establish milestones to better monitor the components, create a way to share the oversight committee's initiatives and look into the root causes of improper payments.

Defense concurred or concurred partially with all of the recommendations except revising its method of choosing components for more payment scrutiny. The department argued that the components it selected are appropriate because they make up 95% of the department’s travel pay distribution. The watchdog pushed back and said it's unclear if there is a correlation between the volume of travel payments and improper travel payment rates because the department did not routinely collect data on each component.

Improper payments have been a challenge governmentwide. “GAO and agencies’ inspectors general have found significant, widespread, and long-standing financial management problems at agencies giving rise to the cumulative total of about $1.5 trillion in estimated improper payments reported by agencies since 2003,” Larry Malenich, managing director of financial management and assurance at GAO, wrote in Government Executive in March 2019.  “Improper payments degrade the integrity of government programs and compromise the public’s trust in government.”

NEXT STORY: The End of the Dan Coats Era